Social media star, Hasbulla Magomedov, has reportedly signed a five-year deal with the UFC said to be  "worth more than many fighters".

The 19-year-old, who suffers from a form of dwarfism, has become one of the biggest names on social media, with 3.2 million followers on Instagram and over 2 billion views on TikTok, and hasn't left the headlines in recent weeks thanks to a long-running spat with Conor McGregor. 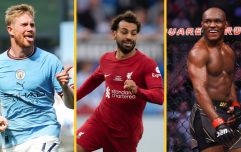 END_OF_DOCUMENT_TOKEN_TO_BE_REPLACED

Combat sports journalist Igor Lazorin broke the news on Instagram, uploading a picture of him and Hasbulla, along with the caption: "Hasbulla signed a five year contract with UFC! So far in the plan – attending tournaments, media activity.

"We will not talk about the amounts in detail, but there they are such that many fighters do not get that much. Hasbulla signed 5 year contract with UFC! No fights yet, but…”

END_OF_DOCUMENT_TOKEN_TO_BE_REPLACED

The Ultimate Fighting Championship has yet to comment on or confirm the deal.

Hasbulla, who hails from Dagestan, has made some famous friends with combat sports in recent years, including the likes of former UFC Lightweight Champion Khabib Nurmagomedov - who he calls his brother. Hasbulla also goes by the nickname 'Mini Khabib' in reference to the fighter.

He's also built up quite a relationship with McGregor, of a different kind.

Earlier this month McGregor made headlines with a series of offensive tweets about Hasbulla, which have since been deleted.

He wrote: "I’d love to boot that little g**p Hasbulla over a goal post. How much to get him on the volley? "I’m gonna make it my mission to score a 3 pointer with him one day, hon the gaa." 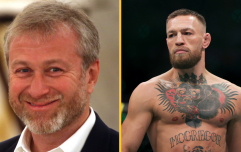 END_OF_DOCUMENT_TOKEN_TO_BE_REPLACED

He also called Hasbull a "little smelly inbred", but it was the influencer who had the last laugh.

He asked UFC President Dana White to make a fight happened between the two, "make it happen, let me eat this chicken" - referring to McGregor.

"I'm hungry, I’ll smash him with my mountain spirit," the teenager added before goading McGregor further: "My brother Khabib smashed him and all his team, now is my time to rise!"

He ended the response with the hashtags "#HasbullaTime" and "#CantDeleteMyTweetsConor".

Hey uncle @danawhite and @ufc please make it happen, let me eat this chicken @TheNotoriousMMA Im hungry, I’ll smash him with my mountain spirit. My brother @TeamKhabib smashed him and all his team, now is my time to rise!👊🏽 #HasbullaTime #CantDeleteMyTweetsConor pic.twitter.com/VdISS3U1Qm

Hasbulla earlier taunted McGregor by naming a chicken after him.

After hearing about the beef, White warned McGregor before he appeared on the podcast, My Mom’s Basement.

“Conor better watch himself. If he runs into Hasbulla then he's gonna be in some big trouble!” White warned.

Earlier this month Hasbulla got himself in a little hot water after appearing on a radio show in Australia and then having a play fight with one of the show's producers.

The social media star caused some unease by getting a little too physical during the match-up.


popular
Sean Dyche set to be named Everton manager after Marcelo Bielsa talks break down
Roy Keane flatly rejects longstanding perception of ex-Man United midfielder Paul Ince
Allianz National Football League Round 1: All the action and talking points
Roy Keane leaves ITV pundits in stitches after Pep Guardiola's pre-match interview
Conor McGregor hit by car ‘at full speed’ while cycling
Quiz: Identify these 15 football clubs that are not named after a place
"I don't like to fill my time that way" - O'Hora going his own way in an era of obsessives and covering all bases
You may also like
2 weeks ago
Dustin Poirier becomes highest profile UFC star to criticise Dana White about striking his wife
3 weeks ago
UFC fans want to see Khabib vs Conor McGregor rematch
1 month ago
T.J. Dillashaw: Conor McGregor is right to pull out of USADA testing pool
1 month ago
Ariel Helwani shares Paddy Pimblett WhatsApp messages as spat becomes public
1 month ago
Conor McGregor savagely hits back at Joe Rogan following PED comments
2 months ago
"There’s a new Irish superstar in town" - Young Derry fighter touted for UFC after big title win
Next Page