"No matter who's the manager, he always played Glenn."

Kenny named a 23-man squad to face Bulgaria and Finland in the Nations League next month on Monday, and while there were first Senior call-ups for the likes of Adam Idah and Jayson Molumby, as well as returns for Harry Arter, Shane Long and James McCarthy, both Whelan and Byrne were conspicuous by their absence. 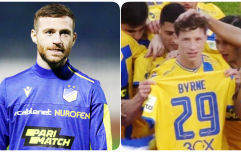 END_OF_DOCUMENT_TOKEN_TO_BE_REPLACED

Both Byrne and Whelan made the Irish squad for their last competitive outing against Denmark in November last year, with Whelan starting that game as Ireland fell agonisingly short of automatic qualification for EURO 2020.

Speaking at the squad announcement on Monday, Ireland boss Stephen Kenny noted the pair were among a number of midfielders dropped from the squad;

"We had four midfield players who were omitted, which were Glenn Whelan, Alan Judge, Josh Cullen and Jack Byrne. So the four players are tough decisions, they all have a lot to give."

In reference to Whelan, Kenny pointed to his longevity in the squad and his high number of appearances as a mark of his quality;

"Glenn's 92 caps, you have to earn every single one of those, and through a succession of managers, no matter who's the manager, he always played Glenn.

"So that tells you something about him. So, I think just on this occasion, he wasn't selected."

Jack Byrne's omission means there is no current League of Ireland player in Kenny's squad, something he says was not relevant to his selection; 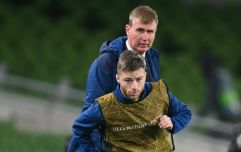 What are we missing about Jack Byrne?

END_OF_DOCUMENT_TOKEN_TO_BE_REPLACED

"I pick whatever I think is right. I think Jack Byrne... I really rate him actually, he's a terrific passer. He's really a joy to watch.

"He's definitely on standby, and he's one who could feature again very shortly."

Kenny's Ireland managerial career will kick off against Bulgaria in Sofia on 3 September, before they welcome Finland to the Aviva Stadium three days later.


popular
"Johnno went, 'We’re not moving! You're trying to mess us about!'" - Ben Kay recalls red carpet controversy
"Some of the generals wanted me executed" - Irish rugby legend on flag caper that went wrong
Tommy Fury spotted having the time of his life at student night out
No Simon Zebo or John Cooney as Ireland gather 50 players for one-day camp
Peter Keane's future as Kerry manager in doubt after strange statement
Clinton Morrison shares advice Roy Keane gave him on morning before Saipan showdown
Garry Ringrose challenges "pretty ridiculous" changing conditions for women's players
You may also like
11 months ago
Jack Byrne must be wondering if Ireland door is already closed
1 year ago
Jack Byrne pays tribute to Jordan Flores after wondergoal of his own
1 year ago
Molumby: the teenager who walked into The Lions' Den
1 year ago
'I don't see what Jeff Hendrick did that Jack Byrne couldn't have'
1 year ago
Parrott, O'Connor and Byrne confirmed to start against New Zealand
1 year ago
"When I came here, I was dead and buried. There was no way back for me"
Next Page