'I’m not sure who's going to ever do that again.'

Steven Gerrard has doubled down on his opinion that Lionel Messi is the greatest footballer of all time, but was quick to praise Cristiano Ronaldo.

The Aston Villa manager came up against Ronaldo several times during the Portuguese international's first stint at Manchester United, however, he believes that it is Paris Saint-Germain man Messi that just about shades the contest between the pair.

Gerrard picks between Messi and Ronaldo

END_OF_DOCUMENT_TOKEN_TO_BE_REPLACED

Asked the question by Gary Neville on his Overlap YouTube channel, Gerrard picked the Argentine as the greatest player in history, before adding: "But I’m someone who would never have a derogatory word to say about Ronaldo, because he is phenomenal."

"They are the two in my era that were just…the numbers - when you’re a footballer and you’ve done it yourself - I’m not sure who’s going to ever do that again."

The Liverpool legend was reiterating a stance he previously expressed, with the 40-year-old saying the same thing on the Robbie Savage Podcast last year.

END_OF_DOCUMENT_TOKEN_TO_BE_REPLACED

"They're [Ronaldo and Messi] very different for me," said Gerrard.

"I think they're both operating on a different planet to every footballer that's ever lived, probably besides your Peles and your Maradonas.

"But Messi, for me, is more of a team player. If he's in on goal, he'll look for a pass as well as obviously posting really, really good numbers individually as well." 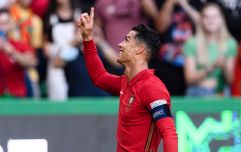 END_OF_DOCUMENT_TOKEN_TO_BE_REPLACED

The discussions surrounding Messi and Ronaldo have gone on for years, with neither camp willing to cede an inch in the row of who is the better player.

Messi has made 966 professional appearances, registering 761 goals and 328 assists, while Ronaldo has played 1114 times, scoring 807 goals and grabbing 230 assists.