St Pauli were so eager to share their good news that they couldn't wait for their manager.

The German side secured the capture of Marvin Ducksch from Borussia Dortmund today and quickly got the news out.

Ewald Lienen - presumably enjoying a few weeks off - was not there for the unveiling but that didn't stop St Pauli.

The club tweeted out a picture of the 22-year-old with director of sport Thomas Meggle and... some lad in a black t-shirt and an Ewald Lienen mask.

On first viewing, the club almost got away with it. For about two minutes. 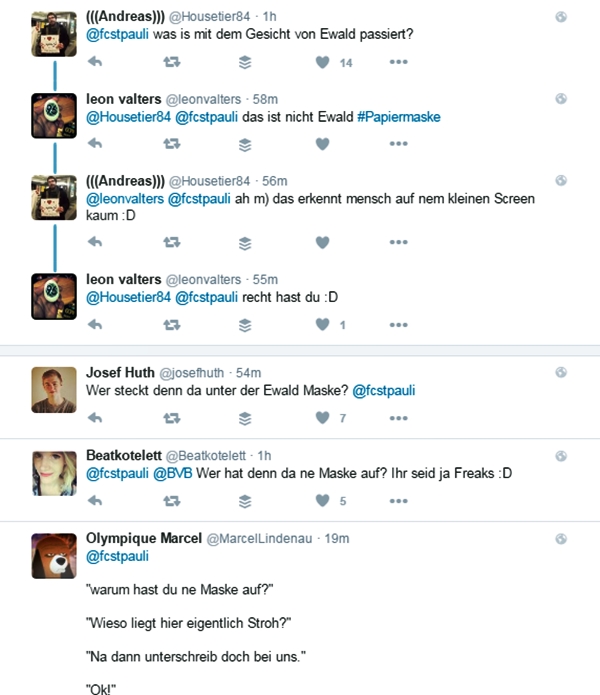 The club quickly spotted that this was only going one way so they held their hands, and mask up.

They would have gotten away with it too, if it wasn't for those pesky kids.


popular
Saracens players reportedly lined up for Irish loan moves
GAA JOE club football team of the year
Jorge Masvidal and Justin Gaethje likeliest options for McGregor
Dana White livid with late stoppage on UFC 246 undercard
Conor McGregor makes surprise call-out after Cerrone destruction
Club footballer of the year steps up to win it for Corofin in the clutch
GAA JOE club hurling team of the year
You may also like
1 year ago
David Pocock shares class post-match dressing room picture with Conor Murray
2 years ago
Ian Madigan brilliantly shuts down Twitter user who was complaining about female referees
2 years ago
Sean O'Brien plays very funny prank on shop assistant in Kilkenny
2 years ago
Sean O'Brien not impressed with Kearney brothers being referred to as 'famous farm boys'
2 years ago
WATCH: Andy Gray, bless him, got himself a bit muddled while talking about Tony Blair
2 years ago
Limerick manager receives best excuse to miss training we've seen in a long time
Next Page