He said that the situation could get "a bit messy."

Gary Neville has given his views on the Harry Kane drama that has been unfolding at Tottenham over recent days.

The Manchester United legend and pundit described Kane as the most "professional football player that I've ever seen," but criticised the striker for not turning up to training this week and warned him about the danger of taking on Spurs owner Daniel Levy.

Talking about the situation, Neville told Sky Sports: "If he was meant to come back on Monday then he should have come back.

"You can never advocate any player not turning up for training, you've got to turn up and do your job.

"I've worked with Harry Kane, and I can't think of a more professional football player that I've ever seen. He does everything right, so he must be seriously annoyed. Something has happened badly that's made him do that.

"It still doesn't excuse it, you still go in and respect your teammates. You still have to go and stand with them and sit in the dressing-room, but it’s clear now that there’s a collision course."

Neville continued: "He's taking Daniel Levy on. Not many do it, not many come out the other side.

"Hopefully they can reach a compromise, because if they can't then it's going to be a bit messy for a couple of weeks. Harry wants to leave, there's no doubt about that."

🗣 "I can't think of a more professional football player that I've ever seen. He must be seriously annoyed."@GNev2 was asked about his thoughts on Harry Kane not turning up for training with Tottenham pic.twitter.com/teCGaq2FNG 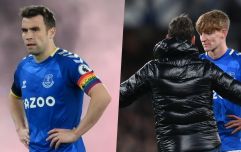 END_OF_DOCUMENT_TOKEN_TO_BE_REPLACED

The drama started on Monday when Kane did not turn up for training, with the striker then also being absent the following day as well.

However it seems like Kane is now backtracking on his hardline stance, with reports on Tuesday suggesting that he would be appearing at the Spurs training ground later on in the week.

For months now it has seemed that he wants to leave the club, with Manchester City the front runners for his signing.


popular
Here's all the GAA games on the tube this weekend as the provincial championship heats up
GAA club transfers that shocked the county: Jason Sherlock
Red cards, slips, heroes, villains and last second equalisers - Derrygonnelly's extra time win over Dromore had it all
Fermanagh footballer opens up about losing her mum to suicide and urges people to seek counselling
Jordan Larmour enjoys satisfying bit of revenge on Mack Hansen
Ronnie O'Sullivan on why he staged sit-down protest during UK Championship defeat
Ruesha Littlejohn gate-crashes Katie McCabe's interview after another player-of-the-match display
You may also like
2 days ago
Mo Salah couldn't help but laugh when asked about Ballon d'Or ranking
2 days ago
Seamus Coleman with Merseyside Derby moment to forget as Liverpool win
2 days ago
Jurgen Klopp riled by line of questioning in pre-match Everton interview
4 days ago
Ralf Rangnick identifies Amadou Haidara as first Man United transfer
5 days ago
Rio Ferdinand and Jamie Carragher trade insults after Roy Keane argument
2 days ago
Borussia Dortmund cancel 67,000 tickets for upcoming match against Bayern Munich
Next Page