Arsenal have splashed out over £100 million on five summer signings and are looking to build on last season's close run on the Champions League places. Gary Neville feels they will bridge that gap, this season, but Roy Keane is not so sure.

Mike Arteta's side missed out on a fourth place finish after losing two of their last three league games, to Newcastle United and Spurs. Their latest campaign started with a 2-0 win, away to Crystal Palace.

END_OF_DOCUMENT_TOKEN_TO_BE_REPLACED

As part of a Sky Sports preview of the Premier League season, Neville said Arsenal are in much better shape than Manchester United, his former club.

"When you ask for top four predictions, I'm going to say United, but that's just heart, not head!" he remarked.

"I think Arsenal definitely, at this moment in time, feel in far better shape, in terms of stability. United have the Frenkie de Jong situation, which is dragging on. The Ronaldo situation, which, to be fair, is a distraction and is causing disturbances to the manager's press conferences and the team ethic he has built on their pre-season tour.

"So they're in a situation where they haven't got all their business done, and they've got a star player that may yet leave. You'd have to say Arsenal." 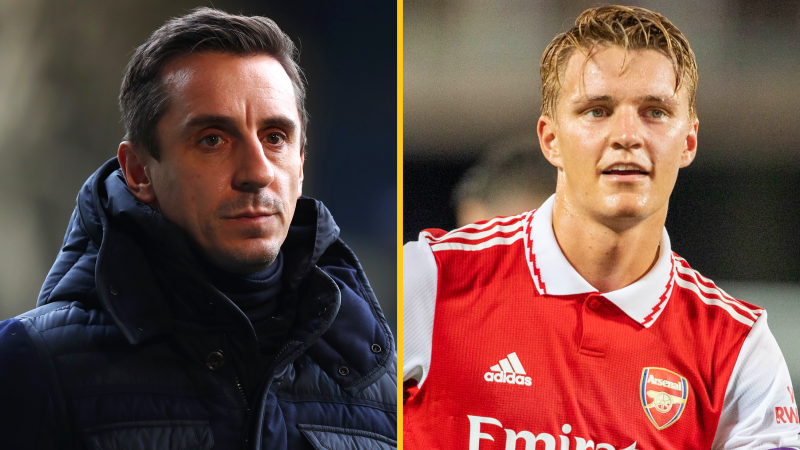 Despite their transfer deals and a winning start to the season, Roy Keane is not as high on Arsenal's prospects as Gary Neville.

"I'd have to disagree with Gary. I still think United [will finish ahead of Arsenal]," said Keane.

"I look at Arsenal and still see all this fuss. You look at last season and all the plaudits they got, with their young players. They got themselves in a really good position and they blew it. That's what they did. They didn't get the job done and they didn't step up to the plate. They couldn't back it up.

"There is something still missing with United. There's obviously stuff going on with Ronaldo and they might get one or two more deals done but I still think from a footballing point of view - forget what my heart says, my head says the same - if United can clean up that mess in the next couple of weeks... I think they'll be pretty decent."

Ahead of Manchester United's season opener against Brighton, at Old Trafford, Keane said that Erik ten Hag needs to resolve the Cristiano Ronaldo situation, letting him stay or go, and make a couple more signings before the transfer window closes.