Almost as soon as Gareth Bale touched down in Madrid, there's been stories linking the Welshman with a return to the Premier League.

This season, things have been no different, with Real's record signing attracting criticism from some supporters and the Spanish press for what they see as sub-standard performances. 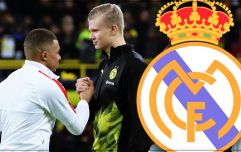 END_OF_DOCUMENT_TOKEN_TO_BE_REPLACED

Now though, it seems even club president, Florentino Perez is disappointed by what he's seen from Bale recently.

“Bale is a magnificent player but if the general level drops Bale also drops," he is quoted as saying by The Sun.

“He and everyone had a level of intensity two years ago that they don’t have now and we have to recover that.”

Perez's comments have followed reports in Spain that the club have recently informed Bale that the expect more from him.

Bale has scored four times in his last 12 outings for Real, and criticism from Perez will almost certainly lead to plenty more speculation about the Welshman's future.