The house of cards is beginning to crumble.

Twenty-four hours after Sepp Blatter denied he was going to be suspended, and about 20 minutes after Michel Platini issued a statement calling rumours of his suspension 'insidious', both men have been given the boot, temporarily, from FIFA after a probe by an ethics committee.

Ex-FIFA Vice-President Chung Mong-joon - a presidential hopeful - has been banned by FIFA for six years and fined CHF 100,000

Fifa Secretary General Jerome Valcke has also been suspended and it seems possible that some of the very top administrators in football's governing body are about to have their careers cut short. 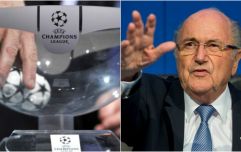 END_OF_DOCUMENT_TOKEN_TO_BE_REPLACED

Blatter has been under huge pressure to resign since criminal proceedings were opened by a Swiss prosecutor into allegations surrounding a TV deal contract sold to former FIFA official Jack Warner in 2006.

In addition, Valcke, who has already been put on leave for a duration of 90 days, has now been banned for 90 days. The governing body said: “The duration of the bans may be extended for an additional period not exceeding 45 days.”

Although it seems the two people that have now taken over the running of football across the globe are hardly squeaky clean either.

The news was greeted with the full yellow news alert on Sky so sh*t got just real.

While this shocking graphic just showing the level of trouble that Fifa have found themselves in over the last few years.

FIFA: something for every taste, from Mafia-level crims to low-level buffoons. pic.twitter.com/yP6CBk67VE


popular
"The economy was one of the big reasons" - Cadogan's move from an electrician to personal training
Eamon McGee just couldn't help himself with Armagh-melee tweet
Kylian Mbappe reportedly wants PSG to sell Neymar
QUIZ: Can you name these 50 Premier League players from the 2010s?
Strongest Ireland team to face New Zealand in Test opener, after squad set-back
Robert Finnerty's strut up to the penalty spot was the stuff of legend
"If he can channel it in the right way, he'll go right to the top of the game" - the brilliance of Rian O'Neill
You may also like
6 years ago
PIC: Richard Keys just couldn't help himself with cringe comment when meeting Sepp Blatter
6 years ago
Fifa have given a laughable reason for a reduction in Sepp Blatter and Michel Platini's bans from football
6 years ago
VIDEO: Steven Gerrard stars alongside James Corden's 'Smithy' in funny Sport Relief sketch
6 years ago
12 scandals that rocked the sports world in 2015
6 years ago
Sepp Blatter name drops Nelson Mandela in bizarre press conference apology
6 years ago
The internet reacts as Sepp Blatter and Michel Platini given eight-year football ban
Next Page