Even Robbie Savage wouldn't use an excuse this bad.

When the BT Pundit played for Birmingham City, he handed in a transfer request and sought to sign for Blackburn Rovers because it was closer to his family home in Wrexham.

The only problem was that Birmingham is actually two miles closer to Wrexham than Blackburn. However, Savage still got his move, but we're not sure if that's the case for virtual Damien Delaney.

The Crystal Palace defender, on Fifa 16, is unsettled and seeks a move on Sean McKay's career mode - because he can't speak English. 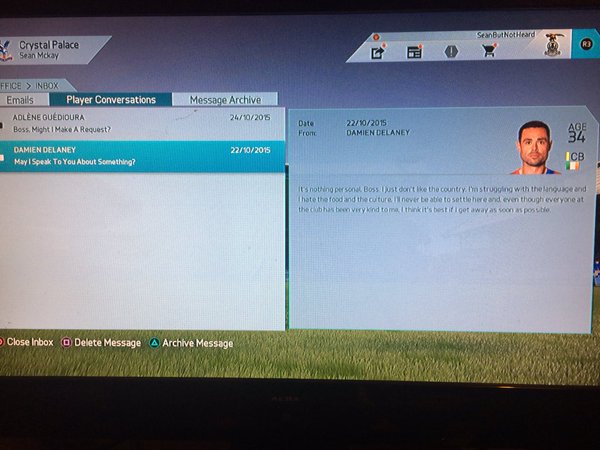 The Irish Post spotted Sean's screenshot, which is pretty embarrassing for a video game that prides itself on being very realistic.

Delaney, who has played in English football for over 15 years, issues his manager an ultimatum on the game, and the Corkman wants out of England because he's struggling to adapt to the culture.

"It's nothing personal boss, I just don’t like the country, I'm struggling with the language and I hate the food and the culture. I'll never be able to settle here and even though everybody at the club has been kind to me, I think it's best if I get away as soon as possible."

This has to be one of the strangest Fifa glitches we've encountered.


popular
From Canada to Carlow in the name of hurling: Nicolas Redmond's journey to the Fitzgibbon Cup
Kerry's captain selection for 2022 sums up the problem with their outdated system
Eddie Jones shares great tale on hour-long chat with 'inspirational' Roy Keane
"It must be difficult to say no, having won a game and heading back together"
Chelsea forced to change Stamford Bridge changing room after Liverpool complaint
Jesse Lingard 'angered by lack of respect' shown by Man United
Roy Keane has heaped praise on Trent Alexander-Arnold
You may also like
1 month ago
Four talking points as Man United beat Crystal Palace in Ralf Rangnick's first match as manager
1 month ago
Leeds condemn homophobic chanting aimed at Crystal Palace's Conor Gallagher
2 months ago
Arsenal fans left fuming by refereeing inconsistency after Evans and Laporte tackles
11 months ago
Wilfried Zaha becomes first Premier League player vowing to stop taking a knee
1 year ago
"We disapprove totally. It's something which we are very disappointed about."
1 year ago
Sebastian Haller and Jack Harrison screamers light up midweek Premier League
Next Page