On Thursday night, Fenerbahce player Muhammed Gumuskaya was left puzzled after trying to kiss a badge that wasn't there. Thanks to Puma's new designs, which sees the crest on the back of the shirt, the iconic kissing of the bade is no longer possible unless players happen to be contortionists.

The Turkish kit, along with current Premier League champions Manchester City, are among ten European clubs to wear the new design from Puma for their third jersey, which will be worn in competitions in the 2021/22 season. 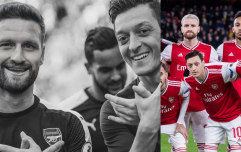 END_OF_DOCUMENT_TOKEN_TO_BE_REPLACED

Gumuskaya secured a win for Fenerbahce against Finland's HJK, with the end score being 1-0. As he went to kiss the badge, something adopted through much of the football world, the badge was no longer there. Puma has repositioned the badge on the back of the shirt, just beneath the collar.

Puma describes the design as 'progressive and refreshing'.

Watching Gumuskaya search for the badge is comparable to trying to find your phone in a bed of blankets, cushions, and hastily folded clothes.

"When you wanna kiss your club badge but you are wearing a PUMA jersey," writes one person on Twitter.


popular
Red cards, slips, heroes, villains and last second equalisers - Derrygonnelly's extra time win over Dromore had it all
Ruesha Littlejohn gate-crashes Katie McCabe's interview after another player-of-the-match display
GAA club transfers that shocked the county: Jason Sherlock
Here's all the GAA games on the tube this weekend as the provincial championship heats up
Jordan Larmour enjoys satisfying bit of revenge on Mack Hansen
Fermanagh footballer opens up about losing her mum to suicide and urges people to seek counselling
Roy Keane's three leadership tips he gave to Owen Farrell can't be argued with
You may also like
3 years ago
Violent scenes on the pitch after Istanbul derby between Fenernahçe and Galatasaray
3 years ago
Gianluigi Buffon has named the top three stadiums he has played in
3 years ago
Mesut Ozil set for January transfer to European club?
3 years ago
Marcos Rojo could be staying at United if Champions League qualifier doesn't go his way
3 years ago
Marcos Rojo could still leave Manchester United on loan with Fenerbahce interested
3 years ago
Liverpool striker Divock Origi edging closer to move away after asking price drops
Next Page