'First thing after a game, all the lads would be checking their Fantasy Football points'

"Salah was my captain... my little boy wasn't happy!"

As much as many current professionals may protest, there are hundreds of them playing fantasy football along with the rest of us.

Last season, the fantasy teams of Manchester United stars Luke Shaw, Chris Smalling and Phil Jones were shared on social media and they featured Manchester City and Liverpool players as captain. Jones' team did not contain a single United player while Smalling had the best team name of the trio - 'Kroos Control'.

END_OF_DOCUMENT_TOKEN_TO_BE_REPLACED

On Liquid Football, former Ireland striker Jon Walters firmly put the claim - that current pros don't play fantasy football - to bed, once and for all.

Walters, who retired in the summer after a 19-year footballing career, told host Kelly Cates that he is back again for fantasy football this season and in a two-team league with his son. Both Walters and his boy are keen Everton fans so the former Ipswich and Stoke star selecting Mo Salah as captain for the opening game-week did not go down well at home.

He also entered his team in a mini league that includes a host of his former Stoke teammates, including Ryan Shawcross, Joe Allen and Peter Crouch, who named his side 'Retired Unathletic'. Walters commented:

"One thing I don't think people realise is that when you get off the pitch, no matter who you are playing and no matter what the result is, the first thing you checked is how you did [in Fantasy Football], what points your captain got and where they are coming in the fantasy league." 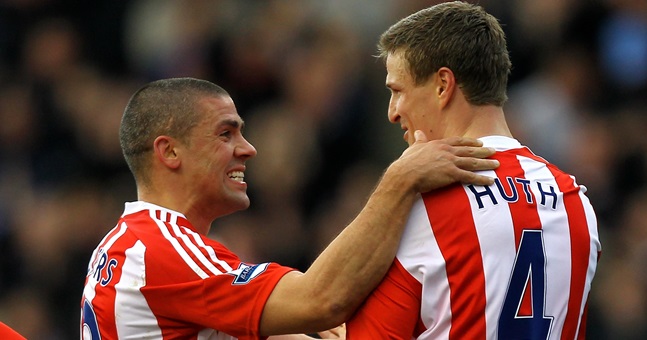 END_OF_DOCUMENT_TOKEN_TO_BE_REPLACED

Walters and Steve Sidwell, who was also on the show, said they often came up against opponents that they had in their fantasy teams that weekend. "A few questionable decisions going on," Walters remarked.

The 35-year-old was delighted when, for a few seasons, he was down as a midfielder in the game so got extra points for scoring. It was around the time that he was Stoke's designated penalty-taker so he was fully justified in picking himself for his fantasy team. There was one unforgettable back-fire too, but he quickly bounced back:

"I was in my team [when I scored two own goals against Chelsea]. And a penalty miss as well!

"Minus points. Think I came bottom that week. But I scored in the mid-week game a few days later."

Rewarded for keeping faith in himself.

Walters and Sidwell also revealed wha the winners and losers in the Stoke mini league got for their troubles:

As for that mini league with Walters and his son, he is leading by a point after week one. Making Salah his captain looks a solid choice.