FAI says Ireland will not play against Russia at any level

Ireland are due to play against Ukraine later this year.

The Republic of Ireland will not play against Russia at any level until further notice, the Football Association of Ireland have said in a statement released on Monday afternoon.

The decision has been made following the Russian invasion of Ukraine. The English FA have also announced a boycott against Russian teams, while the Czech Republic, Poland and Sweden have said they will not play against Russia in their upcoming World Cup playoffs.

The FAI have said that no Irish team, at any level, will compete against the Russian national team. 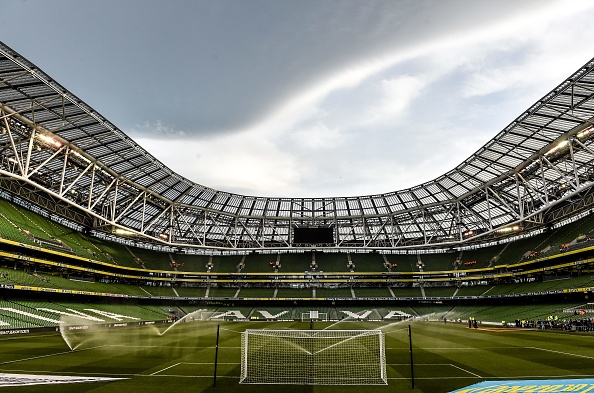 FAI: Ireland will not play against Russia at any level.

"The Football Association of Ireland has offered its full and unequivocal support to Ukraine’s FA and confirmed that no Irish team will play against Russia at any level until further notice," the FAI statement reads.

END_OF_DOCUMENT_TOKEN_TO_BE_REPLACED

"FAI President Gerry McAnaney and CEO Jonathan Hill have contacted their counterparts in the Ukraine with messages of support and solidarity and to inform them that the FAI will be as flexible and accommodating as possible with regards to the staging of the two UEFA Nations League fixtures against Ukraine due to be played in June.

In a show of solidarity, @AVIVAStadium will be lit up in the colours of the Ukrainian flag at 7pm tonight pic.twitter.com/qqL90yDdIY

Aviva Stadium to be lit up with Ukraine colours.

END_OF_DOCUMENT_TOKEN_TO_BE_REPLACED

The FAI also said that the Aviva Stadium in Dublin will be lit up in the colours of the Ukrainian flag at 7 pm on Monday night, as a sign of solidarity with the country and its citizens.

"We have confirmed to our colleagues at the Ukraine Association of Football that the FAI stands firmly alongside them in light of this terrible situation," FAI president Gerry McAnaney said.

"I am sure that fans at our League of Ireland games tonight will also show their support for the people of Ukraine."

Ireland are due to play Ukraine in the UEFA Nations League on June 4 at the Aviva Stadium. The reverse fixture between the teams will be played at a neutral venue.

Meanwhile, Fifa announced on Sunday that Russia will play their upcoming games as the 'Football Union of Russia' (RFU), and without the country's national anthem or flag. Their matches will also be staged at a neutral venue.

However, their upcoming opponents - Poland, and either the Czech Republic or Sweden - have stated they will still not compete against the Russian team.


popular
Brazil star responds after Roy Keane slates dancing celebrations
World Cup 2022 Day 17: All the major action and talking points
Roy Keane reacts to Brazil's jubilant celebrations in first half demolition job
World Cup 2022 Day 16: All the major action and talking points
Roy Keane handled Gary Neville’s goal celebration as most Irish fans would
Didi Hamann thought Brazil substitution was "disrespectful" to South Korea
Rory McIlroy explains 'falling out' with Shane Lowry that lasted a few years
You may also like
3 weeks ago
"I race over to stop him from falling off his chair" - Delaney's shock when he heard O'Neill wanted Keane
4 weeks ago
"I was called ‘the Northerner'" - Martin O'Neill opens up on his time as Ireland manager
4 weeks ago
James McClean gets straight on to Graeme Souness after being told 'to get on with it'
1 month ago
Stephen Ireland explains why his Ireland career ended after only six caps
1 month ago
Stephen Kenny responds to Brian Kerr's criticism of his performance as Ireland manager
1 month ago
"Nobody could touch him that day" - When Roy Keane reigned in Spain
Next Page