El-Hadji Diouf has never been the most diplomatic of people as far as his former Liverpool team-mates are concerned.

The 35-year-old, who last played professionally for Malaysian Premier League club Sabah, has had run-ins with Steven Gerrard, John Arne Riise and Jamie Carragher, to name but three.

But Diouf is trying to give off the impression that he is a changed man, sharing details of his plans to help Macky Sall (pictured above), the president of his home country, Senegal.

Diouf has been appointed an ambassador and special advisor to the president, helping develop Senegal's sporting infrastructure, and he has already shared some very strong opinions on the country's political framework. 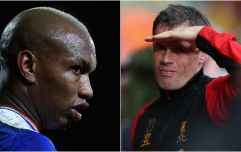 Jamie Carragher snipes back at El-Hadji Diouf in brilliant fashion

END_OF_DOCUMENT_TOKEN_TO_BE_REPLACED

In an interview with French magazine SoFoot, shared by Sen360.fr, Diouf has claimed the president is "surrounded by parasites".

"I want to help youth and support Macky Sall, a great president, in listening to the Senegalese people," he adds.

"His communication with the people has gone wrong. I can help him sort things out." 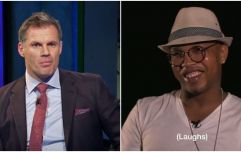 END_OF_DOCUMENT_TOKEN_TO_BE_REPLACED

So, has Diouf lost his hugely self-confident nature as his playing career comes to an end? Perhaps not entirely.

"With my wallet and my knowledge, I will make one of the most beautiful cities in Africa," he says.

"I will change things for my country. Football and politics: all I am doing is amazing."


popular
Peter O'Mahony riled by "petulant s**t" as Munster toasted by Dragons
The clear-cut differences between what Stephen Kenny and Dara O'Shea said, last night
Grim injury news for Seabelo Senatla after Bundee Aki's red card clear-out
Kevin Cassidy believes former teammate should be the next Donegal manager
Damien Delaney criticises Stephen Kenny after 'shambolic' Armenia win
Only fans with a wide range of Irish football knowledge will get full marks in this quiz
The largely ignored reason Ireland rely on James McClean and Jeff Hendrick so much
You may also like
5 years ago
El-Hadji Diouf takes opportunity to slate retiring Steven Gerrard - "He was nothing at all!"
6 years ago
El Hadji Diouf has a ludicrous theory about why Mario Balotelli failed at Liverpool
6 years ago
Gloriously deluded El Hadji Diouf has hit out at the mentality of Jamie Carragher and Steven Gerrard
6 years ago
Game, set and match as Jamie Carragher brilliantly responds to El Hadji Diouf's latest attack
6 years ago
El-Hadji Diouf launches astonishing attack on 'f*****g loser' Jamie Carragher
6 years ago
John Arne Riise was never a fan of El Hadji Diouf judging by his response to Carragher comments
Next Page