Their off the field relationship appears fractious at best.

Paris Saint-Germain teammates Neymar and Edinson Cavani came up against each other on Friday night in an international friendly between Brazil and Uruguay, played at Arsenal's Emirates Stadium.

The pair have enjoyed a prolific but fractious relationship over the past 14 months at PSG, with clashes between them over who should take penalties being made very public. 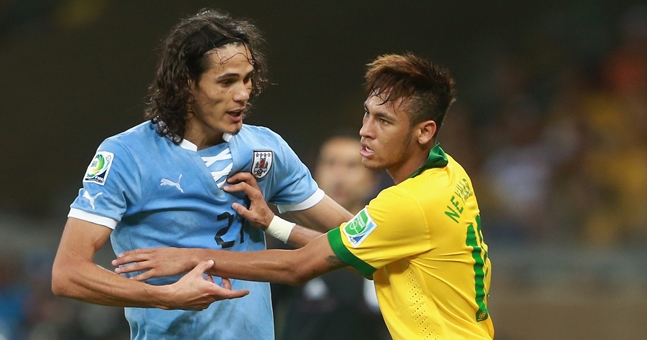 Fair play to Edison Cavani for telling PSG where to go

But they have not let that sort of quibble - reportedly settled over a €1million one-off payment to Cavani - get in the way of their performances on the pitch. As two of the best forwards in world football, it would be almost impossible not for them to combine well, it would require a conscious effort to play badly.

But given the chance to play against each other in the international break, the rivalry between Neymar and Cavani returned.

The game was settled by a cooly finished penalty from Neymar as Brazil emerged 1-0 victors, but Cavani may claim a moral victory after flattening Neymar with a needlessly aggressive tackle.

As Neymar was dribbling down the left flank, Cavani tracked his run and went in hard on the Brazilian, leaving Neymar rolling on the floor, as he does.

Cavani ran off with the ball but the referee called it back and cautioned Cavani, who looked angry and confused by the decision to brandish a card.

Cavani then returned to offer Neymar a helping hand in getting back to his feet, which the Brazil captain appeared to dismiss, without even looking at Cavani.

If this is what they really think of each other, one can make an educated guess that they won't remain teammates for that much longer. So, who will leave first? Neymar to Real Madrid or Cavani to Napoli?

Either way, training on Tuesday will be fun, I'm sure.


popular
The SportsJOE 12 o'clock quiz | Day 136
The daily diet of Manchester United midfielder Jesse Lingard
COMPETITION: Answer this survey for a chance to win a fabulous stay at the Trident Hotel in Kinsale
The diet of a modern day rugby player compared with a top jockey
"It's not about winning at underage. It's about building players and building people"
James Ryan's misfortune opens Leinster and Ireland doors for Ryan Baird
The SportsJOE 12 o'clock quiz | Day 129
You may also like
1 year ago
David De Gea could leave Man Utd for Paris Saint-Germain
1 year ago
PSG's Qatari owners reportedly holding talks with Leeds United over takeover
1 year ago
Neymar receives three match ban for hitting fan after PSG cup final defeat
1 year ago
Neymar facing lengthy ban after striking fan after PSG defeat
1 year ago
Neymar accused of punching Rennes fan after cup final defeat
1 year ago
Ander Herrera turned down offer from Manchester United to almost double his wages
Next Page