It will be a battle of Irish champions versus the Polish champions in the play-off round for the Champions League group stage.

Two legs against Legia Warsaw is all that's standing between Dundalk FC and the Champions League group stage, after the Airtricity League side were drawn against the Polish outfit in Friday's draw in Nyon, Switzerland.

Dundalk will enter into the match buoyed by their historic 3-0 win over BATE Borisov in Tallaght Stadium the third qualifying round.

Warsaw reached this stage by beating Slovakian champions AS Trenčín 1-0 over two legs, which came after their 3-1 aggregate win over Croatian champions HSK Zrinjski Mostar in the second qualifying round.

Dates and times to be confirmed later

It has already been confirmed that Dundalk will play their home leg of the play-off at the Aviva Stadium. 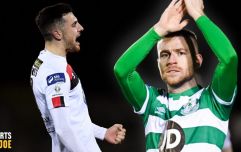 END_OF_DOCUMENT_TOKEN_TO_BE_REPLACED

If the Lilywhites manage to beat Legia Warsaw, they would receive €2 million for the victory plus an additional €12 million for qualifying for the group stage. They would also earn €1.5 million for each group stage win while a draw would earn them €500,000.

Worst case scenario and Dundalk lose the tie, they'll go straight into the Europa League group stage where they'll have at least six games which carry €360,000 and €120,000 for a win or draw.

popular
"They're so far ahead of where I was at 18, it's just off the charts in terms of gym and fitness tests"
"I don't know if the management know what their best 15 is" - Worrying times for Tyrone going into the championship
Damien Duff bides his time before roasting the FAI with 'motivational video' comment
Ronaldo removes Coke, shows off the drink of champions in pre-match conference
Can't imagine Rangers fans were happy about what Ronnie Whelan called Scotland
Euro 2020 Quiz: Group F
Christian Eriksen's first words from hospital are a credit to the man
You may also like
1 year ago
"When I came here, I was dead and buried. There was no way back for me"
2 years ago
John Caulfield parts ways with Cork City
2 years ago
Bohemians launch class new away jersey made by O'Neills
2 years ago
James McClean speaks superbly about former teammate Ryan McBride on punditry debut
3 years ago
League of Ireland star Kieran Sadlier scores goal from inside his own box
3 years ago
Bohemians rock Rovers with 98th minute winner as ugly scenes blight Dublin Derby
Next Page