Letting his gloves do the talking.

In the days proceeding Manchester United's wretched 4-1 defeat against Watford, David de Gea was not the only player to post a message of thanks or support (or both) on social media.

With big clubs, it would be a story whether you post to your page or not. Whether your social media person/team posts or not. Raise the head above the parapet or keep it out of sight and people will remark upon it, either way.

END_OF_DOCUMENT_TOKEN_TO_BE_REPLACED

De Gea's account post a picture of him with the recently fired Ole Gunnar Solskjaer, with the accompanying caption - 'You always gave everything and everyone knows you are a legend at Manchester United'.

Sure enough, there were plenty of likes and a slew of nasty comments. 'Stick to the football' variety, 'Too late now' and a lot coarser than that.

The naysayers advised De Gea, and his teammates, to do their talking on the pitch. It is worth noting, though, how Solskjaer constantly backed the Spaniard when he spoke with the media, despite a slump in form that stretched from the 2018 World Cup until the end of last season.

De Gea went into that World Cup as one of the best five goalkeepers in the world. He struggled in the warm-ups, took poor form into the tournament and brought it back from that early exit. For so long he was the best thing about United [winning four Matt Busby awards for best senior team player in five seasons] but he struggled for the end of José Mourinho's reign and the start of Solskjaer's. 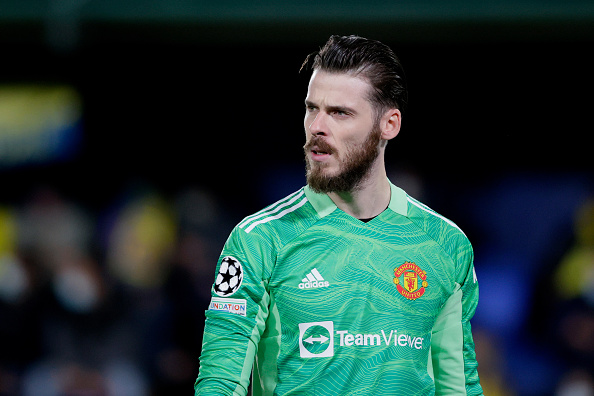 David de Gea returns to form as others lose their's

Dean Henderson returned from his Sheffield United loan and both goalkeepers traded starting XI places. By the end of last season, though, he has regained the No.1 spot. When he conceded 11 goals and missed his spot-kick in the Europa League Final, Solskjaer had his back.

END_OF_DOCUMENT_TOKEN_TO_BE_REPLACED

This season, he has been United's best player. The shame - and it is a massive one for United - is that his best form for the club in three years coincided with the defence falling off a cliff. With the club ignoring the glaring need for a defensive midfielder and the likes of Harry Maguire, Arron Wan-Bissaka and Victor Lindelof struggling, De Gea was back in his 'to the rescue' days.

He has not been perfect, but he made a string of stunning saves. Were it not for his interventions, United would be near the relegation places in the league and nowhere near the Champions League knock-outs.

The fact that he has conceded 28 goals in 17 appearances but been their star performer, on many occasions, shows the mess United are in this season. It shows - among other reasons - why Solskjaer had to go.

On Saturday, at Vicarage Road, De Gea delivered another stinging riposte that he directed at his teammates in the hope it would get through, at least, to some.

"It was embarrassing, the way we played today... it's not acceptable for this club and the level of players that we have. It's another nightmare," De Gea told the BBC.

"There's been some difficulties but I don't really know what to say. I have been in difficult moments with this club but we are in a difficult situation - we don't know what to do with the ball, we are conceding a lot of goals. It's a horrible moment. It's easy to say the manager and staff but the ones who are on the pitch are the players and they're the ones who have to score goals and fight on the pitch."

De Gea was told by many to pipe down and show his worth on the pitch.

He had been doing it for most of the season, though. In Villareal, tonight, he was at it again.

The 31-year-old pulled off five saves, with two of their world-class. This one, as United were still struggling to get out of their half, was the pick of an impressive bunch.

Stunning save to keep Man United in it pic.twitter.com/mUhJaF6Hul

Michael Carrick looked dead-set on getting out of Spain with a 0-0 draw, but he dipped into United's bag of multi-million attacking talent.

On came Bruno Fernandes and Marcus Rashford, and it was a spark for the lads that had looked far too safe and shaky for the first hour.

Cristiano Ronaldo, yet again, got the vital goal - his fifth in six Champions League games since rejoining the club from Juventus. Jadon Sancho broke his goal and assist duck at the death.

Others will get the headlines, but they would not have made it with David de Gea. Enough said.