The Portuguese attacker was not having that.

Manchester United lost 4-1 to Watford at Vicarage Road to continue a wretched run of league form. Many of the travelling supporters turned on Ole Gunnar Solskjaer at full-time, but Bruno Fernandes rushed to his defence.

United fell 2-0 behind to Watford after goals from old boy Josh King and Ismaila Sarr. They got back into the game through Donnie van de Beek, but went down to 10 men when Harry Maguire was red-carded.

The final stages saw Cristiano Ronaldo have a goal ruled out for offside and Watford add to their tally through João Pedro and Emanuel Dennis. 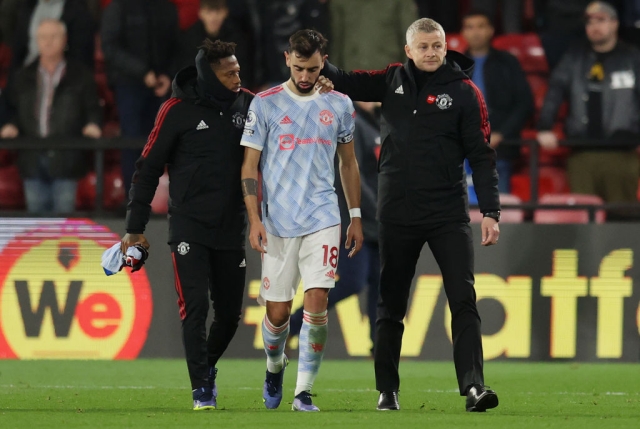 END_OF_DOCUMENT_TOKEN_TO_BE_REPLACED

At full-time, Solskjaer went to console so disconsolate United players and approached the away fans.

The Norwegian raised his arms in apology, but it was clearly a futile gesture to some supporters that have watched them fall meekly to the likes of Aston Villa, Young Boys, Manchester City, West Ham and Liverpool in recent months.

There was a loud chorus of boos and jeers as Solskjaer approached the United supporters. It sparked a passionate response from Bruno Fernandes.

The United attacker remonstrated with fans as they booed his manager. He pointed to the players and suggested it was them, not Solskjaer, that they should be angry with.

He eventually had to be led away by Solskjaer and Brazilian midfielder Fred.

Following the game, United goalkeeper David De Gea spoke of the "difficult" moment his team have found themselves in. He commented:

"There's not much to say - it was embarrassing to see Man United play like we did today. It's not acceptable - the way we were playing and doing things. It's easy to blame the manager or the staff but sometimes it's the players. We need to show much more than we are doing.

"Embarrassing first half - we could've conceded four goals in 45 minutes. It was hard to watch the team playing today - it was nightmare after nightmare. It's not acceptable.

"We are trying to give our best and fight for the team but for sure something is very wrong. You can see in the games - it's very low level, very poor. Sorry to the fans, once again."

The once again line shows how bad this season has become for United.

They play Villareal away on Tuesday. Getting a positive result over in Spain, and advancing to the Champions League knock-out stages, may be the only way to save Solskjaer's job.