Yet another Manchester United player wants out

Anthony Martial is not the only one who has had enough of life at Old Trafford under Jose Mourinho.

Most Manchester United fans will admit to being concerned at the club's lack of serious summer transfer moves. Sure, Brazilian midfielder Fred has arrived in but he has only been joined by full-back prospect Diogo Dalot and veteran goalkeeper Lee Grant.

Liverpool and Manchester City are splashing the cash, Chelsea are gearing up now that Maurizio Sarri has been appointed and Unai Emery has started to make his mark at Arsenal. Only Tottenham have been as sluggish in the summer market as United.

However, while most are focused on who is coming in, eyes should be peeled for the exit door.

Martial is said to be desperate to get away from Mourinho after his relegation to bit-part player cost him a World Cup spot with France. Matteo Darmian has just come straight out and declared he wants shot of the place.

The Italian international has never been a regular under Mourinho and he told reporters in California, on United's pre-season tour of America, that he wants to move on. He said:

"I want to play more regularly. Last season, I didn't play much - that's my objective and my ambition. That's why I spoke with the manager and also with the club about my future.

"I want to leave but we will see what happens because we don't know." 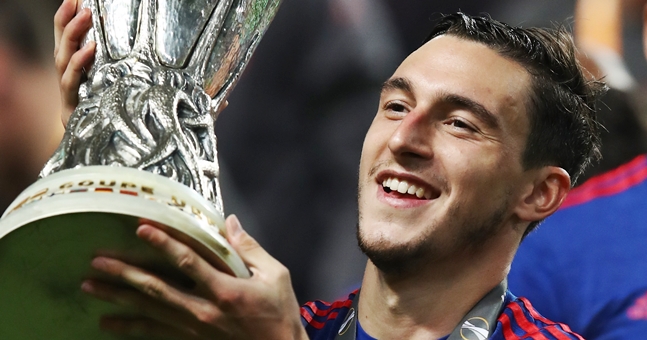 Inter Milan and Juventus are both said to be interested in the defender but United want a decent offer, and are certainly not keen on loaning him out.

Darmian stated his preference in heading back to Serie A and added, 'We will see what happens.

"Honestly, I'm waiting. If I stay, I stay and I do what I did up until now. If I go, it is because the offer that another team makes will be good.

"To play for probably the best club in the world is a good thing, and for me, it's an honour to play here and play for Manchester United. But we have to take decisions in our life and this is my decision."

Mourinho and United are said to be interested in strengthening the defence ahead of the new season but, one suspects, a decent offer for Darmian would not face much resistance.


popular
Six minutes was all Alan Connolly needed to score two goals and set up another
'Jesus Christ! How am I going to put up with this lad for nine weeks?!'
Sensational scenes in Belfast as Antrim edge out Clare in a thriller
"Of the 37, Bundee Aki would be my 37th most expected selection and my worst rated"
Gatland comments give insight as to why CJ Stander missed Lions call
Peter Queally vaults into Bellator title picture with stunning win over Pitbull
'Johnny Sexton completely outplayed Farrell and Russell in the Six Nations'
You may also like
5 days ago
Jamie Carragher hits out at 'lazy punditry' after Man United protest
1 week ago
"Jack Grealish would be brilliant for Man United... he has to be selfish" - Roy Keane
1 week ago
Roy Keane makes Jamie Carragher remark as fans break into Old Trafford
2 weeks ago
Solskjaer chats with protesting United fans who broke into club's training ground
2 weeks ago
Joel Glazer tried to talk Ed Woodward out of quitting Manchester United
2 weeks ago
Joel Glazer's apology proves United fan's greatest criticism was right
Next Page