The fee has been agreed and there's a 'contract in principle'.

Pep Guardiola looks set to be reunited with Dani Alves because the Brazilian is on the brink of leaving Juventus.

The Guardian have reported that both clubs have agreed a fee for the 34-year-old defender and Alves is expected to sign a two-year deal at the Etihad. 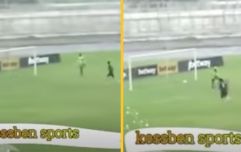 END_OF_DOCUMENT_TOKEN_TO_BE_REPLACED

Given that City were happy to let Bacary Sagna and Gaël Clichy leave on a free when their contracts expire, it's clear that the right-back position is one where Guardiola will need to strengthen.

Kyle Walker remains one of their top targets, but it has been reported that Spurs are holding out for a fee that's in excess of £40m for the England defender.

Alves still has one year left on his contract at Juventus, but it appears that a bid of around £5m will be enough to convince this year's beaten Champions League finalists to sell the 34-year-old.

If he signs for City, the Brazilian will become their third signing of the summer after they landed Bernardo Silva and Ederson.


popular
"If I break my wrist, it's on f***ing both of you." - Koepka and Berger act the spoiled child
Shane Lowry delivers big time for Europe as he takes down US stars
"I told him the absolute truth" - Sergio Garcia on his Ryder Cup talk with Rory McIlroy
Galway fans' frosty reception for Davy Fitz doesn't make any sense
Simon Zebo gives Andy Farrell better answer than any interview could provide
Padraig Harrington's 12th hole reaction as McIlroy and Poulter roasted needs no words
Team USA stars so confident of victory, they start chugging beers at Ryder Cup
You may also like
18 hours ago
Solskjaer claims Aston Villa winner was offside and takes aim at away side
22 hours ago
Emi Martinez really got into Bruno Fernandes' head with comments before penalty
1 day ago
David Moyes reveals how Marcelo Bielsa derailed Man Utd title win
1 day ago
Nuno admits Spurs are ignoring new heading limit guidelines in training
2 days ago
Drinking in seats at football stadiums could soon be allowed again
2 days ago
Bolton Wanderers announce they will cut all ties with betting companies
Next Page