In Dante's Inferno, those sinners who enter hell are handed ironic punishments in keeping with their crimes in life.

And we'll be honest, we didn't expect Czech football club Sparta Prague to carry the concept into the 20th century.

Goalkeeper Tomáš Koubek and midfielder Lukáš Vácha were so incensed by a poor call from a female official during Sparta's 3-3 draw with FC Zbrojovka Brno that they made sexist remarks claiming women belong "at the stove". 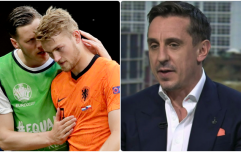 END_OF_DOCUMENT_TOKEN_TO_BE_REPLACED

And the Czech pair, club teammates of former Arsenal man Tomáš Rosický, have been ordered to train with Sparta's women's team as punishment.

CEO Adam Kotalík called the players comments' unacceptable,' in a statement published on the club site.

"In addition to becoming ambassadors for the Women's Champions League, both will report to the head of women's football at Sparta, Dusan Žovince, and attend several training sessions with one of our female teams, to see for themselves that women can be handy not only at the stove."

Koubek has since apologised for his comments on Facebook, writing: "I wasn't meant chauvinistically, my statement was directed at a specific person and situation that arose in the game...I love my girls and I want to prove something in life, what we're proud of."

Vácha has also issued a statement, in which he says his comment was 'directed to a specific error which affected the outcome of the game, not for any other women'.

"I support women in male sports, and also female football fans," he adds.


popular
The FootballJOE Pub Quiz: Week 11
O'Hora and Keegan hammer into each other, both of them only revelling in it
McBrearty has dramatic equaliser ruled out as Naomh Conaill win Donegal grudge game
Man United's tactical issues summed up in six shocking screenshots
Jesse Lingard seeks to clear up what United fan shouted when he was warming up
Liverpool's half-time words in Old Trafford dressing room will please fans greatly
Man United experiencing their Bishop Brennan getting kicked up the arse moment
You may also like
4 months ago
Netherlands prepared to walk-off if racially abused at Euros
4 months ago
Euro 2020 Quiz: Group D
2 years ago
Raheem Sterling dedicates his goal to young fan Damary Dawkins
3 years ago
Tomas Repka facing six months in prison for advertising sexual services of ex-wife
5 years ago
PIC: Croatian hooligans posted their master plan on Facebook before Czech Republic game
5 years ago
This might explain why Croatian supporters threw flares onto the pitch
Next Page