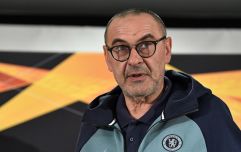 END_OF_DOCUMENT_TOKEN_TO_BE_REPLACED

Ranieri has been given a 'multi-year' contract by Fulham and will take charge of his first game when Fulham take on fellow strugglers Southampton this weekend.

“It is an honour to accept Mr. Khan’s invitation and opportunity to lead Fulham, a fantastic club with tradition and history,” Ranieri said.

“The objective at Fulham should never be to merely survive in the Premier League. We must at all times be a difficult opponent and should expect to succeed. This Fulham squad has exceptional talent that is contrary to its position in the table. I know this team is very capable of better performances, which we will work on straight away as we prepare for Southampton at the Cottage.”

Jokanović was widely loved by Fulham fans for taking the club back to the Premier League and playing an expansive style of football, but one win in 12 matches this season left Shahid Khan with no other option but to let him go.

In every Premier League game this season, Jokanović fielded a different back four, unable to find the right combinations after spending £100m in the summer - the first time a newly promoted side had ever spent so much.