A great move by the club.

Just over a month after Seamus Coleman’s leg break versus Wales, Everton have announced that they will retain the services of the Irish international tying him down to a long-term contract.

📝 | Seamus Coleman has signed a new five-year contract at #EFC! 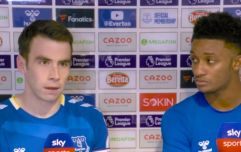 END_OF_DOCUMENT_TOKEN_TO_BE_REPLACED

In a statement released on the club website, Coleman said that the deal is a ‘massive boost’ in his road to recovery.

The deal was agreed in principal before Coleman left the club for international duties where he suffered his horrific leg break and club chairman Bill Kenwright assured the 28-year old that deal would still be on the table despite the injury.

“I’m delighted to get this signed,

“I’ve been here for a long time and it’s a special Club that means a lot to me.”

Coleman signed for the Toffees for a mere £60,000 back in 2009 and has established himself as one of the Premier League’s top defenders since.

"I’m delighted with how the Club has handled the situation. Knowing that I was going to come back and sign it has definitely helped things. It’s a massive boost and gives me something to fight for.

“I want to prove my worth when I come back and show the Club were right for rewarding me with this long-term contract.”

This is yet another example of how well the club has treated Coleman since bearing the brunt of Neil Taylor’s challenge with manager Ronald Koeman visiting the player in Donegal last month.

Today we visit Seamus Coleman and his Family! Looking strong and positive pic.twitter.com/T0bSx5yCoI

And twitter reaction to the deal has been largely positive.

This shit is why this is the greatest club on the planet.

Well done to everyone involved.

And that, ladies and gentlemen, is how you handle business.


popular
"I remember someone saying, 'This guy's the best of the lot of them. Just wait for him'" - Brian O'Driscoll
"I trained with a guy that was born in 2004 the other day. We reckoned Earlsie could be his father!" - Peter O'Mahony
Nigel Owens on most annoying players to referee (three of them are Irish)
The story of the GAA's greatest ever minor
Six All Blacks but no Ireland players in world's top 20 list headed by Antoine Dupont
Cork GAA will have fight on its hands to hang onto top prospect
Longford GAA movie explores the tale so many young footballers can relate to

You may also like
5 days ago
Everton fan, who spent £1,000 to watch Liverpool game, leaves after 18 minutes
6 days ago
Seamus Coleman intervened after his Everton teammate was confronted by a fan on the pitch
1 week ago
Seamus Coleman with Merseyside Derby moment to forget as Liverpool win
1 week ago
Jurgen Klopp riled by line of questioning in pre-match Everton interview
1 week ago
You have four minutes to do this tricky Everton and Liverpool quiz
1 week ago
Jurgen Klopp gives fiery response to comments on Merseyside derby
Next Page