On the day Cristiano Ronaldo, Erik ten Hag, Jorge Mendes and Alex Ferguson were all at Manchester United's training facilities at Carrington, the club released a tranche of Christian Eriksen interviews, pictures and videos.

Ronaldo and his agent could yet be looking at ways to head out the 'Exit' door, with Ferguson's presence at the Aon Complex no coincidence. This was the Portuguese star's first day back, reporting for club duty after some extra time off to be with his family.

END_OF_DOCUMENT_TOKEN_TO_BE_REPLACED

While Ronaldo's future at United is unclear, Eriksen is settling into his new club and already looking forward to his first run-out(s) in that famous red, black and white jersey. The Dane, who United signed as a free agent after his short-term contract at Brentford, has given his first interview, for the club's official website.

Asked for his ambitions with the club, Eriksen replied, "Of course, to be top again.

"It’s the dream of the club and the history is now being the best, so I think the only aim is to go as high as possible and see where it takes us. But I think the aim is definitely to win something." 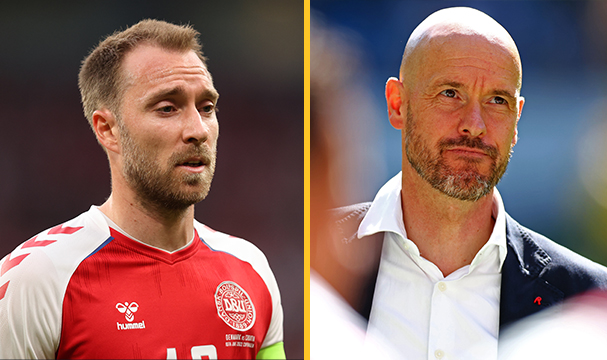 Christian Eriksen on his footballing heroes

END_OF_DOCUMENT_TOKEN_TO_BE_REPLACED

Following a cardiac arrest at Euro 2020, in June 2021, Christian Eriksen was eventually released early from his Inter Milan contracted. He trained, for a spell, with former club Ajax, who were coached by Erik ten Hag, before playing from January to May of this year with Brentford.

Asked how influential ten Hag, now the United boss, was in getting him to Manchester, the Dane said, "Very.

"I want to come here to play football, I don’t come here just for the logo itself, I want to come here and play. Obviously to speak with the manager and hear his ideas and have conversations with him on the football terms was great and ideal for me to get the decision and the possibility of coming to Manchester United."

END_OF_DOCUMENT_TOKEN_TO_BE_REPLACED

During the wide-ranging interview, Eriksen spoke of his run-in with United defender Brandon Williams, when Brentford faced Norwich City last season, and his World Cup ambitions with Denmark.

He was also asked for his footballing heroes, and while he said he had a few, Eriksen named just two. In fairness, both were ballers in their day:

"I had Francesco Totti - mostly because at that age I played a lot of Football Manager, so I had took over Roma back in that time!

"And then after it was Michael Laudrup. As Danes I can pick Michael Laudrup, but I really wasn’t into many idols. I preferred myself to be on the pitch and really just to be outside and play by myself." 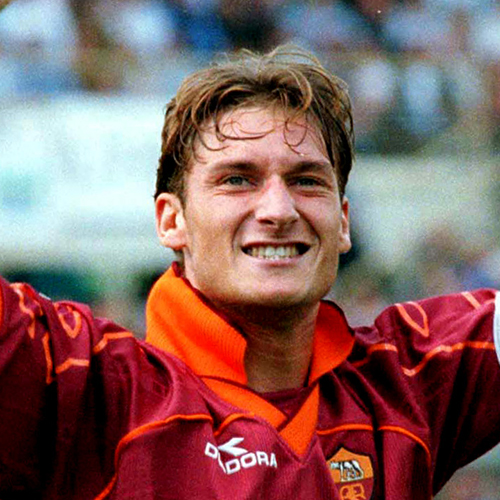 This weekend, Manchester United are facing Atletico Madrid in Oslo, on Saturday, and Rayo Vallecano the following day at Old Trafford.

Erik ten Hag may spit his squad up for that under-taking, so Christian Eriksen is expected to make his club debut in one of the outings. His goal will be to force himself into the club's plans for their Premier League opener, at Old Trafford, on August 7.


popular
Ranking the best county GAA songs of all-time (32-1)
"It was unfair on the Galway backs” - Tomás Ó Sé admits that Kerry benefitted from unfair rule
"I’ve never heard someone say something as stupid” - Katie Taylor blasts Jake Paul's rematch comments
"I don’t trust you" - Joey Barton delivers brutal dismissal of Irish defender
Antonio Conte 'banishes' four Tottenham players from first-team
"I remember just hugging this Irish guy" - How one Kiwi rugby star reacted to Ireland's historic series win
"I'll ask for everyone that comes to the game to wear purple and roots for us" - Pat Fitzgerald
You may also like
1 day ago
Javier Hernandez offers to play for Manchester United for free
1 day ago
Man United target two new forwards as desperate search for a striker goes on
1 day ago
Former Manchester United director Michael Knighton reveals plan to buy the club from the Glazers
2 days ago
Man United 'pull out' of Marko Arnautovic move as fans send letters to club CEO
2 days ago
Amad Diallo scores twice as Cristiano Ronaldo sits out behind-closed-doors friendly
3 days ago
Graeme Souness is still criticising Paul Pogba, weeks after Manchester United exit
Next Page