Stats don't always paint the whole picture but they have their purpose.

Chelsea have arguably been one of the revelations of the Premier League season. Stuck with a transfer ban and unable to bring in any signings, Frank Lampard's side have started well, scoring 19 goals in nine games with striker Tammy Abraham leading the league charts with eight goals. The 22-year-old has taken the league by storm after a spell in the English Championship with Aston Villa. He scored 26 goals in 40 appearances for The Lions before rejoining Chelsea in the summer.

Sean Dyche's Burnley who sit eight in the table welcome fourth-placed Chelsea on Saturday in what, on paper, seems to be a one-way result. Burnley however, aren't doing so bad themselves. While they have scored fewer goals than Chelsea, they've kept more clean sheets and conceded fewer goals.

Additionally, Chris Wood has been Burnley's top scorer this season with four Premier League goals in nine appearances. This may seem like a small number but when you consider that Burnley as a whole has only scored 12 goals so far, it means that a third of those goals have come from Wood.

His underlying numbers are quite good:

According to stats compiled by WhoScored, below is a chart comparing Wood to Chelsea's top scorer Tammy Abraham 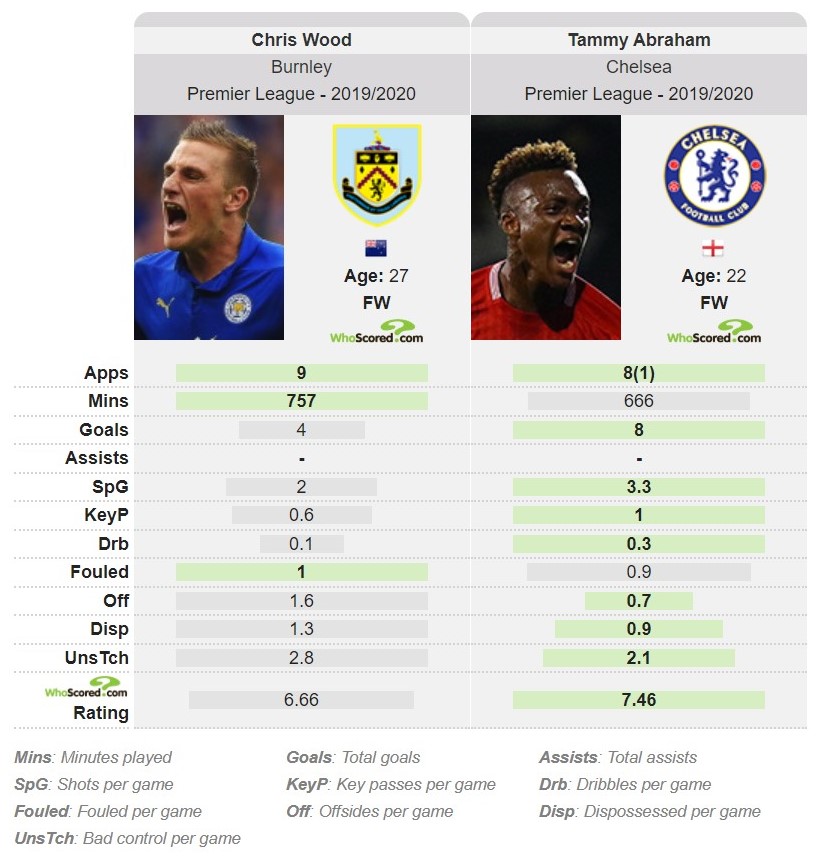 As you can see, while Tammy has been enjoying a brilliant season for Chelsea so far topping the PL scoring charts alongside Sergio Aguero, Wood's efforts aren't miles behind despite playing in a lesser team with a poorer attack.

END_OF_DOCUMENT_TOKEN_TO_BE_REPLACED

Burnley will certainly give Chelsea a game but The Blues are on a roll right now, with three straight wins following their narrow loss against Liverpool last month. Additionally, their in-form forwards will surely give Burnley's backline a run for their money. Right now, it's hard to see anything other than a Chelsea victory at Turf Moor on Saturday and that's why we recommend them as your pick despite the decent exploits of Chris Wood and Burnley in the league. 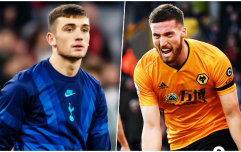 END_OF_DOCUMENT_TOKEN_TO_BE_REPLACED

Frank Lampard's side are just two points shy off Pep Guardiola's Man City in the table, which is saying something.  The Blues have won four of their last five top-flight games and that record looks set to continue on Saturday. Additionally, Burnley haven't won at home against Chelsea since 1983.

While Sean Dyche's side are a tricky bag to handle and are capable of upsetting the big boys on their day, Chelsea have too much momentum and firepower to not come away with a result. Tammy Abraham, Mason Mount and Ross Barkley are sparkling right now. Additionally, Ngolo Kante, Christian Pulisic and Willian are all capable of chipping in with goals and assists.

Newcastle are faced with the prospect of relegation this season and despite their heroic win against Manchester United two weeks ago, they lost to Chelsea last week to sit in 18th place with eight points from nine games. They've scored the joint fewest goals in the league (five) and have lost three of their last five matches. Manager Steve Bruce seems yet to figure out how to bail his drowning team.

Wolves meanwhile started the season with questionable results but have bounced back well. Just before the international break, they shocked the reigning champs Man City with a 2-0 win and now sit in 13th place with 11 points − above a certain Manchester United.

Newcastle's expensive signings Joelinton and Miguel Almiron are yet to deliver on their promise and with Wolves getting back into their groove, Nuno Espirito Santos's men look set for the victory. 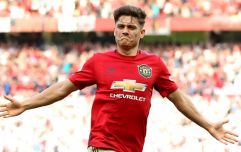 END_OF_DOCUMENT_TOKEN_TO_BE_REPLACED

The juiciest clash of the weekend. First place v seventh.

More than a few people were surprised when high-flying Liverpool were held to a draw against struggling Manchester United on the weekend.  The result abruptly ended Liverpool's 17-game win streak but The Reds still sit comfortably atop the table with 25 points from nine games and still remain unbeaten.

Tottenham meanwhile have endured their worst start to a season in recent years with Pochettino's men winning just three of their opening nine matches. Losses to Leicester, Brighton and a 7-2 pasting at the hands of Bayern Munich in the Champions League has created more cause for concern.

However, all hope is not lost. Spurs conjured up a confidence-boosting 5-0 win over Red Star Belgrade on Tuesday night in the CL. Striker Harry Kane is on fire right now, having scored his 200th club career goal. He now has 15 goals in his last 15 games for club and country. Even when his team remains unconvincing, Kane never fails to deliver. Additionally, Son Heung-Min continues to chip in with useful goals and assists.

Liverpool, however, will certainly be favourites for this clash. Mohammed Salah who missed the game against Man United due to an ankle injury should return to the starting XI on Sunday. According to stats provided by the Premier League, Liverpool have the historical edge over Tottenham − winning 25 of the 54 total matches. 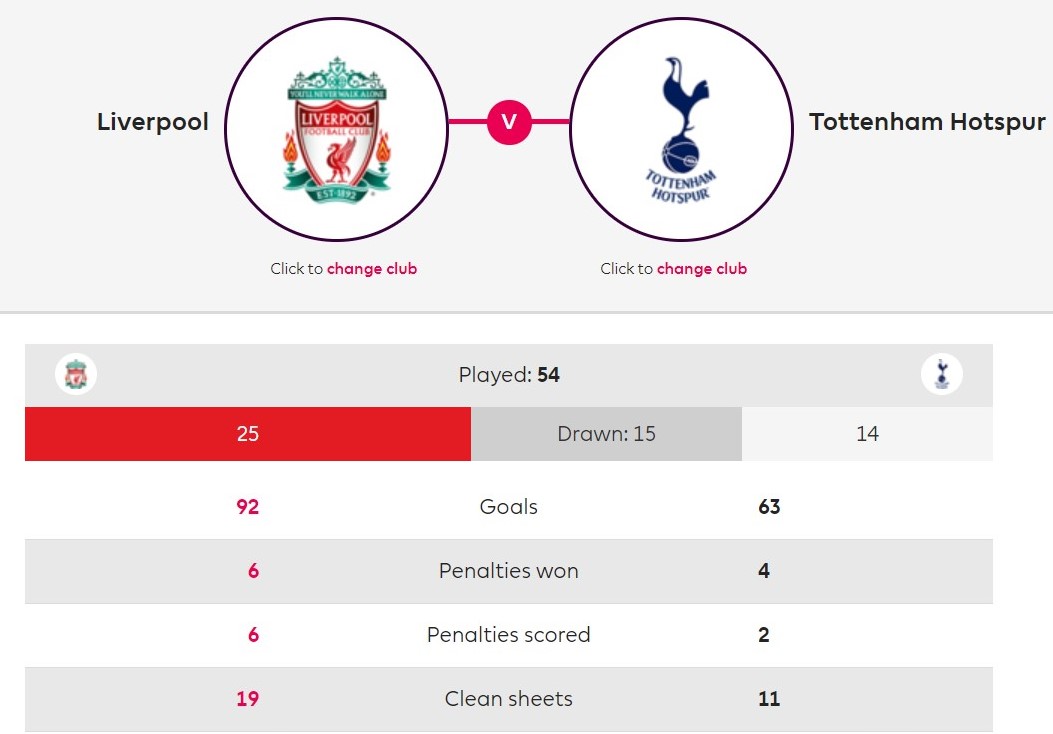 In their last two fixtures, Liverpool emerged as narrow victors and you should expect the same on Sunday. Tottenham will have renewed confidence after their midweek showing and Kane and Son could end up on the scoresheet but with Salah back in the team and Alisson back in goal, Liverpool should be able to grind out a victory at Anfield.


popular
"If Murray is playing that first half for England, he's probably Man of the Match"
Jacob Stockdale and Johnny Sexton not spared by English press
Tyson Fury reveals what happened when he sparred Anthony Joshua
'Were they up for it more than us? That's my responsibility' - Andy Farrell
Baz & Andrew's House Of Rugby - Twickenham carnage
ROG hits the nail on the head assessing Ireland's performance
Triple Crown wrenched away as England scrape Ireland off their boots
You may also like
3 months ago
Liverpool are the Premier League's best team but remain unconvincing
3 months ago
Wilfred Ndidi is the best defensive midfielder in the Premier League
4 months ago
Scott McTominay's stats compared to Fabinho's aren't as bad as you'd think
2 years ago
Irishman has James McClean to thank after outrageous 2,000/1 punt comes good
2 years ago
Ronan O'Gara proposal for Johnny Sexton's back-up makes a lot of sense
2 years ago
It's crazy that Munster moves to sign players from rival provinces were blocked
Next Page