On his day, few have better ability to pull off an unthinkable pass like Cesc Fabregas.

In recent years, Fabregas has shown the ability to spread the ball about from deep like a quarterback and in his prime, Fabregas played in so many teammates with perfectly weighted assists from a more advanced position.

It's hard to believe that Fabregas is still only 31 and he still has plenty of tricks in his locker, as evidenced during Monaco's recent victory over Lyon. 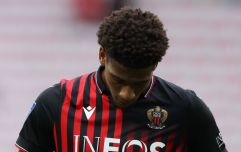 END_OF_DOCUMENT_TOKEN_TO_BE_REPLACED

Fabregas proudly claims to have invented a new way to pass the ball during his ninth appearance for his new club, after leaving Chelsea last month.

It might take a few watches to figures out what Fabregas has done here but he essentially collected the ball and laid it off to a teammate with a beautiful flick, all in one movement.

Fabregas maintains that the pass was fully intentional, responding with a simple "of course I did" when asked if he meant it.

Of course I did

Sunday's win saw Monaco move five points clear of the relegation zone after a dire first half of the Ligue 1 season, with the club dismissing two managers already.

After being sacked in October and replaced by Thierry Henry, Leonardo Jardim has returned to the dugout and seems to have stopped the rot, with three wins and one draw from Monaco's last four games.


popular
Patrice Evra 'likes' photo of Luis Suarez in tears after World Cup exit
QUIZ: Can you identify the World Cup 2018 team from the crest?
World Cup 2022 Day 13: All the major action and talking points
Skills, scowls and scores - Luis Suarez rolls back the years against Ghana
Shay Given on how far Ireland could've gone at the 2002 World Cup with Roy Keane in the team
From Ireland to Argentina: Alexis Mac Allister's Irish roots explained
The SportsJOE Friday Pub quiz: Week 3
You may also like
1 year ago
Pochettino claims Ligue 1 is even more physical than the Premier League
1 year ago
Players left bleeding and with 'strangle marks' after Nice v Marseille carnage
1 year ago
Neymar continues red card fight down tunnel as PSG knocked off perch
1 year ago
Angel Di Maria subbed off following robbery at his home during PSG game
1 year ago
Marseille fans set fires and breach training ground to demand president's resignation
3 years ago
Paris Saint-Germain pursuing second Kylian Mbappe
Next Page