Celtic fans are certainly enjoying how wound up Steven Gerrard has been all week.

Last weekend's Old Firm derby defeat to Celtic gave the Rangers manager a lot to talk about during his press conferences throughout the week, with plenty of complaints about the several flashpoints in the match.

Gerrard spent his time in front of the media explaining why his club was appealing against Ryan Kent's SFA charge for a clash with Scott Brown and shortly thereafter, the Gers boss was hit with a charge of his own for comments he made to the referee after last Sunday's defeat.

While Celtic's title party was delayed on Saturday due to a 0-0 draw with Livingston, supporters were in great form and brought along a banner to Celtic Park aimed at Gerrard.

'Get Well Soon, Stevie G,' read the banner which didn't go unnoticed by those in attendance. 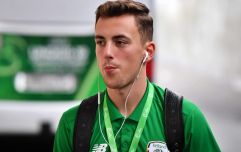 END_OF_DOCUMENT_TOKEN_TO_BE_REPLACED

Celtic manager Neil Lennon also took the opportunity to treat himself to a little dig at Gerrard in the wake of the latest Old Firm clash.

"The only rational thing Steven Gerrard has said this week is that they played the best team in the country on Sunday," Lennon said.

"We should be talking about our form since the turn of the year. The players play the game the right way and within the laws of the game."


popular
The SportsJOE 12 o'clock quiz | Day 113
Jack Charlton's role in getting Roy Keane to Manchester United has been revealed
Can you name every English football league club that begins with 'S'?
"Never back against the Irish" - How the BBC covered our USA 94 win over Italy
Roy Keane on the experience of being managed by Jack Charlton at USA 94
Max Holloway's class gesture after controversial UFC 251 loss transcends the sport
Dublin club Man O'War suspends all training and matches after positive Covid-19 test
You may also like
10 months ago
"He deserves his ban and he's got everything to do to get back into my team"
10 months ago
Celtic receive tough group as Europa League draw is made
10 months ago
Ireland underage international could follow Luca Connell to Celtic
11 months ago
Neil Lennon defends sale of Kieran Tierney to Arsenal
11 months ago
Steven Gerrard ridiculed for 'brutal truth' about Celtic league win
11 months ago
Arsenal make improved bid for Celtic's Kieran Tierney
Next Page