PIC: Barcelona to pay tribute to Johan Cruyff during El Clasico with a one-off kit

A fitted tribute to the man.

Barcelona will play their first club game since te untimely death of Johan Cruyff this weekend, and it just happens to be against their biggest rivals Real Madrid.

The man who helped create Total Football' guided the Catalans to their first European Cup triumph in 1992 and was widely regarded as the instigator of their current tika-taka style.

The Dutchman sadly passed away last month after  a battle with lung cancer, and this weekend, ahead of a possible title deciding El Clasico, Barcelona have revealed a special tribute on their jersey to the Dutch master.

Luis Enrique's side currently enjoy a nine-point advantage at the top of the La Liga standings,  with Real Madrid 10 points adrift in third. 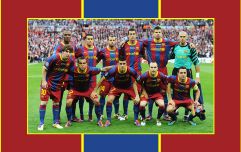 END_OF_DOCUMENT_TOKEN_TO_BE_REPLACED

A win for the home side would see the title race all but wrapped up, while Madrid are desperate for a boost.

And a victory for Luis Enrique’s men would effectively wrap up the title with just seven games of the league season remaining.

As for Madrid, a win could fire them back into the title hunt and give Zinedine Zidane’s men the boost they need going into the run-in.


popular
Roy Keane's first impression of Cristiano Ronaldo proved to be very accurate
The SportsJOE 12 o'clock quiz | Day 290
The 14 Irish players Down Under as TG4 come up with the goods once again
Lady Gaga will perform Satanic ritual during Super Bowl halftime show, according to conspiracy theorist
Joe Rogan reveals he could be parting ways with the UFC
The SportsJOE 12 o'clock quiz | Day 289
"I kind of decided on Hill 16, 'you're either going to do this or you're not going to do this.'"
You may also like
1 month ago
Barcelona can avoid Liverpool payment if they sell Philippe Coutinho in January
2 months ago
Lionel Messi told "you know where the door is" after questioning manager
3 months ago
The hardest Lionel Messi quiz you will ever take
3 months ago
Messi takes to Instagram with swipe at Barcelona board and farewell to Suarez
3 months ago
Max Aarons nears Barcelona move as Wolves land Nelson Semedo
4 months ago
Lionel Messi adamant contract clause means he can leave Barcelona for free
Next Page