Barcelona have completed the signing of midfielder Frenkie De Jong from Ajax for a whopping €75 million plus a possible €11m in add-ons.

The versatile Dutchman has been a shining light for Ajax over the past two seasons, impressing everyone - especially Barca - with his dribbling, passing and comfort under pressure.

What you've all been waiting for... pic.twitter.com/gDE1mujMLF

END_OF_DOCUMENT_TOKEN_TO_BE_REPLACED

De Jong signs a five-year contract, stretching until the end of the 2023/24 season.

He will spend the remainder of this season in the Eredivisie before officially joining up with the Barça in July 2019. 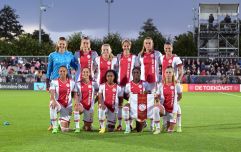 END_OF_DOCUMENT_TOKEN_TO_BE_REPLACED

With the signing of De Jong, it's now a lot more likely that Barça will give up on their pursuit of Paris Saint-Germain midfielder Adrien Rabiot, whose contract expires in the summer.

That could allow Tottenham to move in for the Frenchman, with the Premier League outfit in desperate need of reinforcements in midfield.