'First I tried to take Messi'

Cristiano Ronaldo's new coach has admitted with a laugh that he wanted to sign the star's main rival, Lionel Messi, after his World Cup win for Argentina.

At a press conference, Al-Nassr boss Rudi Garcia was asked about Ronaldo's arrival in Saudi Arabia on a £175million-a-year deal, and replied: "First I tried to take Messi."

Garcia then erupted with laughter.

Al Nassr coach, Rudi Garcia, asked about Ronaldo before the official announcement: "I wanted to bring Messi from Doha."

Al-Nassr announced the arrival of the Portugal forward on Friday, with Ronaldo being pictured holding the team's yellow and blue short with his trademark No 7 on the back. He will also take on an ambassadorial role to promote Saudi Arabia's bid to co-host the 2030 World Cup.

History in the making. This is a signing that will not only inspire our club to achieve even greater success but inspire our league, our nation and future generations, boys and girls to be the best version of themselves. Welcome @Cristiano to your new home @AlNassrFC pic.twitter.com/oan7nu8NWC

Following the termination of his Manchester United contract, Ronaldo, 37, had been a free agent.

END_OF_DOCUMENT_TOKEN_TO_BE_REPLACED

Garcia, formerly of Roma, Marseille and Lyon, took charge at Al-Nassr in June and has insisted that "the great players are the easiest to manage" ahead of Ronaldo's arrival.

Ronaldo will join the club following an explosive interview with Piers Morgan, and after fall-outs with Erik ten Hag at United and Portugal coach Fernando Santos at the World Cup.

Garcia told AS: "I think that any coach would be delighted to train a great star like Cristiano and already in November 2021 I was very close to going to United. 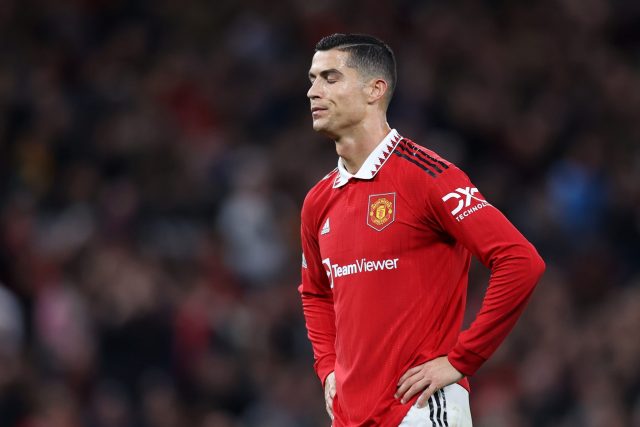 "They chose Ralf Rangnick, but I met twice with John Murtough and Darren Fletcher [United's director of football and technical director respectively].

"I came very close to coaching this club and was very motivated to go, who wouldn't be motivated to coach United? Any coach. United's simple interest has allowed me to be sure of my ambitions in the future.

"I have always thought that the great players are the easiest to manage because they are very intelligent, I verified this with Francesco Totti at Roma."

Al-Nassr fans have already displayed just how excited they are about Ronaldo's arrival by snapping up replica shirts and chanting his name in the stands.


popular
Man United could be blocked from playing in the Champions League next season
Ireland team vs. France: Form players rewarded and a welcome return
French media's opinion of this Ireland team becomes clear as vital clash nears
Man United vs Leeds: Why the game won't be shown on Irish TV
Eight players to watch in tonight's Sigerson Cup semi-finals
Clive Woodward happy to 'eat humble pie' after bold comments about Ireland
"I should have been more mature" - O'Sullivan's injury trail a cautionary tale for Sigerson casualties
You may also like
3 weeks ago
Tyrone manager labels David Clifford as 'Messi of Croke Park'
3 weeks ago
Netflix reveals a host of major upcoming sports documentaries
3 weeks ago
Lionel Messi called 'sewer rat' in leaked email from Barcelona employee
1 month ago
Carlos Tevez explains why he didn't contact Lionel Messi after the World Cup
1 month ago
Sergio Aguero reveals that his World Cup celebrations wound Lionel Messi up
1 month ago
The 10 best footballers of all time* have been revealed
Next Page