Aaron Connolly is back

Aaron Connolly is back, I say.

It was a tough blow, losing out on penalties to Slovakia after dominating them, after losing Adam Idah and Aaron Connolly pre game owing to HSE regulations, finding out the case they were deemed a close contact with later returned negative and missing out on the Euros in the process and all the memories, the home games for this tournament and the money that would've provided.

But that was just the third game of the Stephen Kenny reign. Before that, he had taken just five training sessions with the team and things, already, have been looking better.

The draw against Wales on Sunday night wasn't spectacular but, with five players being omitted from the squad with Covid a factor, the manager's hands were tied.

"Stephen Kenny has this group of people lying around the island waiting and willing for him to fail miserably, because he suggested that Ireland could play better football.

But, now, Aaron Connolly is back.

It's been frustrating for the player in question too. He was healthy all along, he was fit to play and he was eager but had to miss out on a one-off playoff for a major tournament which would've set them up for a trip to Belfast next month. 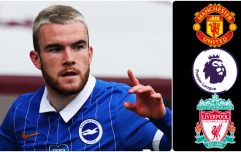 END_OF_DOCUMENT_TOKEN_TO_BE_REPLACED

He was then sent back to Brighton but, now, in a whirlwind week, Connolly has rejoined the Republic of Ireland squad and is available for selection for the Finland Nations League game which kicks off at 5pm on Wednesday.

With Adam Idah also returning, Kenny has a better pick for the clash and the FAI confirmed the good news in a statement.

'Republic of Ireland striker Aaron Connolly has rejoined the squad ahead of the UEFA Nations League match against Finland on Wednesday.

'Connolly has been given permission to rejoin the squad by the HSE and travelled back to Dublin this morning.


popular
In defeat, Jerry Kelly dies with his boots on in coming of age final display
"I knew I didn't have the pace or strength, it was just get it and try kick it left or right"
The SportsJOE 12 o'clock quiz | Day 288
QUIZ: You have 30 seconds to answer this one tricky football question
The SportsJOE 12 o'clock quiz | Day 286
You'll have to be a diehard fan to get 20/20 in this Liverpool players of the 90s quiz
SportsJOE 2000s Football Quiz | Round 11
You may also like
1 year ago
Mick McCarthy waits on Aaron Connolly scan following injury against Manchester United
1 year ago
Aaron Connolly lasts only 45 minutes as Man United torment Brighton
1 year ago
Parrott, Connolly and Obafemi all named in provisional Ireland squad
1 year ago
The stats that show Ireland NEED to start that man Aaron Connolly
1 year ago
The Ireland XI that should start our crucial game against Switzerland
1 year ago
Aaron Connolly extremely hard on himself after 'gutting' missed chances
Next Page