"I am a goalscorer" - Curtis delivers on attacking promise

Ronan Curtis was a standout performer against Bulgaria, and he's ready for more.

The scoreline applies a flattering gloss to a largely drab international friendly. That being said, there were a number of huge positives to take from Ireland’s 3-1 win over Bulgaria. We should be excited, and not just about the u21s.

Like all friendlies, this game came with a number of caveats. And changes. 10 in total from the side that salvaged a point against top seeds Switzerland last Thursday. Five debutants. Three goals.

Yes, Bulgaria are ranked 60th in the world. Yes, they packed their defence and invited Irish pressure for most of the game. Yes, we were bizarrely playing one of our best attacking midfielders at left back.

But, this was a game that left Irish fans with plenty of optimism. Let’s bear in mind, the last time we scored three goals in one match was against Uruguay in June 2017. Remember that Georgia will also pack their defence against us in that crucial qualifier next month. Don't forget, Bulgaria are 60th in the World Rankings… Georgia are 92nd.

I spoke last week about the feeling of positivity in the Irish camp compared to the dark clouds that hung over the final days, weeks and months of the O’Neill-Keane era.

In this weird purgatory mode we find ourselves in as we await the succession of King Kenny and his exciting under 21 side, this Irish side now needs to back it up with action, with goals. They’re beginning to do that.

There were a number of stand-out performances last night. Jack Byrne was instrumental in creating the final two goals in a real insight into what he has produced all season for Shamrock Rovers. Alan Browne delivered on the expectations that have only grown as he has sat on the Irish bench. Alan Judge looks to be over a horrific injury that threatened to scupper his entire career. Ronan Curtis was a constant thorn in the Bulgarian side, and forced the initial breakthrough in the game with a neat cut inside and sharp shot at the near post. 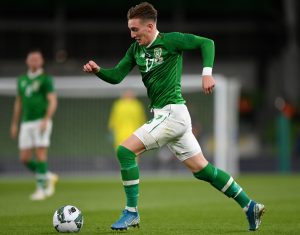 Currently at Portsmouth, where he amassed 11 goals and 8 assists in League One last season, Curtis (speaking at a SPAR/FAI event) also recognised the new feeling in the camp;

“Yeah we feel the positivity. The boys are all getting along, we have banter and we have a laugh and it's good to be top of the table… The mood and the confidence within the camp is good.”

END_OF_DOCUMENT_TOKEN_TO_BE_REPLACED

Described by Mick McCarthy in one press conference as, simply, “a player who gets goals”, Curtis was a livewire whenever he got on the ball last night. Coming into a side that has struggled for goals in recent years, does he feel that added pressure?

“No, not really. I am a goalscorer, and I like to set up my players as well in the team. So hopefully when I do play, I get my chance and I can supply the goals and supply the assists as well at the same time. I'm hoping I can deliver.”

Curtis was made to wait for his international bow, not capped at underage for Ireland until he reached the last few months of his eligibility for the u21 side in 2017. His move to Portsmouth the following summer from Derry City sparked Martin O’Neill’s interest and he was called up to the Senior squad that summer. He didn’t mind biding his time;

“It was just that I was waiting for the right time and the right moment. I knew in my heart of all hearts I would get one one day. But then, I finally did get one and it was a confidence boost then to push me on and stride further in my career and luckily I've done that. Under Martin O'Neill, he gave me my first cap for the Seniors and I've just pushed and pushed on now. I'm glad to be here with the boys... I’m just here to bide my time, I'm still a young lad and hopefully I get my chance when it suits the gaffer.”

In purely footballing terms, it’s just a good time to be an Irish fan at the moment. The future isn’t looking too bad either.

popular
The SportsJOE 12 o'clock quiz | Day 140
Getting 20/20 in our Champions League quiz would be a miracle
"There's times I do think I probably have let people down but in fairness, I have got good support from back home"
Robin McBryde on training session that sent message to Leinster's international stars
Only a Champions League fanatic would get full marks in this quiz
Jonny Hayes and Aberdeen teammates apologise after Covid cluster shutdown
The SportsJOE 12 o'clock quiz | Day 137
You may also like
4 days ago
James Ryan's misfortune opens Leinster and Ireland doors for Ryan Baird
2 weeks ago
Ireland set for Six Nations decider in Paris on October 31
3 weeks ago
We challenge any rugby player to top Jack McGrath's lockdown hobby
4 weeks ago
When the President interrupted a Euro 88 pint between Charlton and Dunphy
4 weeks ago
How an uncultured Englishman conquered Ireland's sporting heart
4 weeks ago
The SportsJOE 12 o'clock quiz | Jack Charlton special (Day 112)
Next Page