Well this is embarrassing

Anyone who's ever stepped into a boxing ring will know it's a pretty scary place to be.

Just a few feet between you and your opponent and just your fists to try and get out of there without getting 'a free plastic surgery facelift' as Bernard Hopkins once famously said. 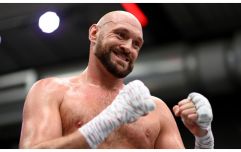 END_OF_DOCUMENT_TOKEN_TO_BE_REPLACED

Last night saw the US claim a first world boxing title at heavyweight since 2007 as Deontay Wilder beat Bermane Striver on points in Las Vegas to win the WBC title.

Wilder was the huge favourite and many thought the fight would be over quickly as the former Olympic bronze medalist had never been past four rounds before.

Stiverne made it very difficult for the Alabama native but sometimes his tactics may not always have been too fair, especially at the end of the second round when he decided the best way to get at Wilder would be to rugby tackle him in the corner of the ring,taking the referee down with him as well

Both boxers dusted themselves down for another nine rounds, with Wilder taking the title on points after a punishing night at the MGM Grand.

Next up could be Wladimir Klitschko, who probably wouldn't be best pleased with these sorts of tactics.