The Dallas Cowboys' stadium was filled with 73,000 fans - making it the largest indoor boxing event in US history.

In the first round, Canelo made it his game plan clear from the off, going to the body of BJS with heavy left hooks to work his way around the Englishman's awkward southpaw stance and slippery style.

By the third it looked like the Mexican had BJS rattled as he closed the distance and landed the cleaner shots. However, Saunders started to find his rhythm in the 4th and actually went on to arguably steal the round but most certainly won the 5th as he started to drop his hands and even taunt the four-weight world champion.

Some of the pundits on DAZN even had the British boxer ahead on the scorecards as he started to use every inch of that 22-foot ring that caused so much drama in the build-up, and Canelo did seem to struggle to land that right hand detonator. 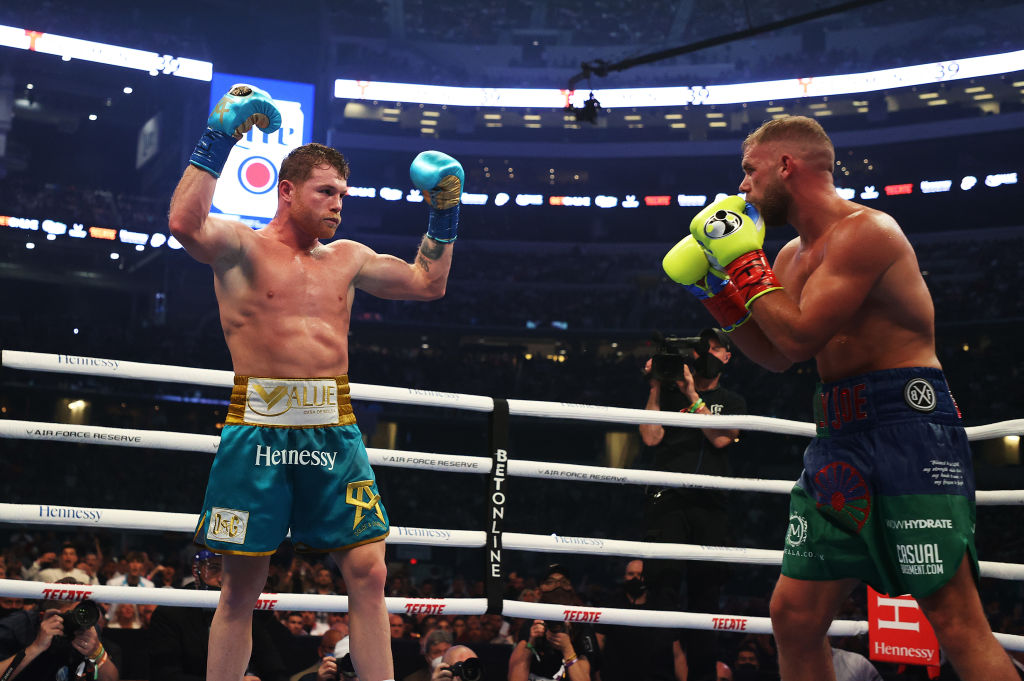 However, land it he did in the 8th as BJS went to roll Canelo's left hook, but instead laid his chin on a plate for an absolutely destructive right-hand uppercut from the red-haired power puncher, and his right eye instantly blackened.

END_OF_DOCUMENT_TOKEN_TO_BE_REPLACED

Canelo knew he had hurt the Hatfield hitter as he started celebrating to the crowd in the middle of the round like a matador goading the bull with a red cape. He was right to celebrate because even though BJS survived the round, he was retired on his stool by his cornerman and didn't come back out for the 9th.

Afterwards Canelo admitted "I think I broke his face" as BJS didn't even stay in the ring for a post-fight interview and was instead sent straight to an ambulance to get his eye checked for what is believed to be a broken orbital cheekbone.

The is the first defeat for the silky southpaw, while Canelo now just needs one more belt to complete the super-middleweight collection and unify the whole division.

Caleb Plant holds the missing trinket in the form of the IBF world title and Canelo stated boldly and with all the same venom as the bad guy in an action movie: "I want him next."

popular
"I don't know if the management know what their best 15 is" - Worrying times for Tyrone going into the championship
Damien Duff bides his time before roasting the FAI with 'motivational video' comment
"They're so far ahead of where I was at 18, it's just off the charts in terms of gym and fitness tests"
Ronaldo removes Coke, shows off the drink of champions in pre-match conference
Can't imagine Rangers fans were happy about what Ronnie Whelan called Scotland
Euro 2020 Quiz: Group F
Christian Eriksen's first words from hospital are a credit to the man
You may also like
2 weeks ago
"Can't wait to shut this ***** up" - UFC knock-out monster signs on to box Jake Paul
2 weeks ago
Tyson Fury's nutritionist reveals how 'The Gypsy King' lost 30 pounds in 30 days
2 weeks ago
"Give me a crack at that title!" - Jason Quigley makes his play after gutsy win
2 weeks ago
Anthony Joshua responds after John Fury criticises Tyson's team
3 weeks ago
Anthony Joshua lays Tyson Fury out in the first round of their online spat
4 weeks ago
"I cannot wait to smash Anthony Joshua on the biggest stage of all time" - Finally, the fight news we have all been waiting on
Next Page