Taylor has sights set on Persoon after Volante domination

Now three belts in the bank. She's coming for the fourth.

On the 26th of November 2016, Katie Taylor made her pro debut at the SSE Wembley Arena, where she beat Karina Kopinska with a third-round KO. 27 months and 12 more wins on and Taylor is a unified lightweight world champion, holding the WBA, IBF and WBO belts. 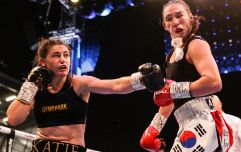 END_OF_DOCUMENT_TOKEN_TO_BE_REPLACED

Taylor has cruised her way through the lightweight division by beating the divisions toughest fighters as she fought in venues from Wembley Stadium to Madison Square Garden.

The Bray boxer claimed the WBO title with a dominating KO victory over Rose Volante in Philadelphia last night. Taylor now has three of the four lightweight women's belts and will look to become the undisputed world champion by claiming the WBC title which is currently held by Belgian Delphine Persoon.

A fight between Taylor and Persoon has been much talked about and when asked about it in a post-fight interview on Sky Sports last night, Taylor made it clear she's ready to make the fight between the two happen.

🗣 "Delfine Persoon is next." @KatieTaylor sets her sights firmly on becoming the Undisputed Champ.

"Ye absolutely, that's a fight that people have talked about for over a year now and I can start talking about that fight now. Rose Volante fight's over, and Delfine Persoon is next."

Persoon has won 43 of her 44 fights with her only loss coming at the hands of fellow Belgian Zelda Tekin in November 2010. Interestingly, only one of her fights has taken place outside of Belgium. That fight was against Swiss fighter Nicole Boss and was held in Bern in 2014.

END_OF_DOCUMENT_TOKEN_TO_BE_REPLACED

The railway policewoman has made nine successful defences of her WBC title since winning it in 2014 by beating Erica Faria. Taylor will look to hand Persoon her first defeat in five years to complete her collection of women's lightweight titles.

The fight is set to be scheduled for June where it will be a winner takes all fight to become the undisputed women's lightweight champion of the world. It promises to be a cracking fight and with Katie ready to make it happen, it looks like it's all set up to happen.


popular
Here's all the GAA games on the tube this weekend as the provincial championship heats up
GAA club transfers that shocked the county: Jason Sherlock
Red cards, slips, heroes, villains and last second equalisers - Derrygonnelly's extra time win over Dromore had it all
Fermanagh footballer opens up about losing her mum to suicide and urges people to seek counselling
Jordan Larmour enjoys satisfying bit of revenge on Mack Hansen
Ronnie O'Sullivan on why he staged sit-down protest during UK Championship defeat
Ruesha Littlejohn gate-crashes Katie McCabe's interview after another player-of-the-match display