REVEALED: A punch-by-punch, montage-by-montage look at which is the Rockiest of all the Rocky movies

It took re-watching all the movies set in the Rocky universe in the space of six days to fully understand the full weight of this epigram from the Italian Stallion because, let's be honest here, Rocky V hit the franchise harder than an Ivan Drago haymaker on Apollo Creed.

That's 12 hours and 59 minutes across seven movies to dissect and analyse in order to prove which of the Rocky movies are the Rockiest by comparing how much heartfelt drama, fighting, montages and all the other Rocky hallmarks each one contains. Even if this quantitative analysis fails, at least it will allow this cinephile to vent his white-knuckled contempt for Rocky V.

END_OF_DOCUMENT_TOKEN_TO_BE_REPLACED

The fact that the franchise was able to get back up off the canvas, steady its legs and make the 10 count after that monstrous concussive blow of *sigh* Tommy "Machine" Gunn, is the embodiment of what made the world start rooting for this underdog story in the first place.

That line from Rocky Balboa perfectly summed up that never-say-die spirit of that brawling warrior who seized his opportunity for greatness with both hands swinging three decades earlier and, rather worryingly, it also proved the existence of that horrendous fifth instalment actually adds to the franchise.

40 years after it all began Rocky has returned again, only this time he's passing the torch onto another underdog with his own point to prove. Creed is a film which not only pays its respects to the original, but is a brilliant achievement in film-making as a stand-alone movie.

The $29,632,823 it grossed in its opening weekend while going up against the popcorn devouring behemoth The Hunger Games Mockingjay Part II is a testament to that.

However, we're aware that the introduction of a new protagonist and director may leave people skeptical about whether Creed belongs in the series or not. To convert the doubters, we've decided to scientifically prove its merits as a Rocky film.

These are boxing films after all and while the drama is required to keep the plot progressing, you can't forget about all that macho combat that acts as the climax to every film in the franchise.

END_OF_DOCUMENT_TOKEN_TO_BE_REPLACED

We've totted up all the screen time devoted to fighting, which includes competitive boxing in the ring, street brawls and in the case of Rocky Balboa, the computer simulated bout between Mason Dixon and Balboa.

In terms of pure violence, Rocky III comes out on top with 14:28 minutes of screen time devoted to fighting. Rocky IV takes second spot with 12:92, Rocky II is our bronze-medalist with 12:29. Coming in at a respectable fourth place is Creed with 12:19 followed by Rocky V (10:37), Rocky (10:08) and finally Rocky Balboa (9:51) whose wooden spoon position isn't surprising considering our hero was in his 50s. 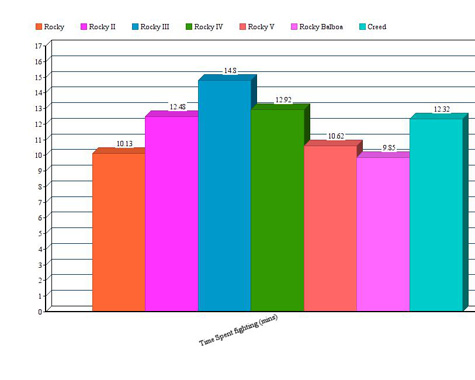 END_OF_DOCUMENT_TOKEN_TO_BE_REPLACED

Another fan favourite testosterone-driven hallmark are the training sequences in which we see the all the hard work that shapes our hero into a killer, whether that involves catching chickens in Rocky II, homoerotic beach races in Rocky III or aggressive wood chopping in the fourth film. 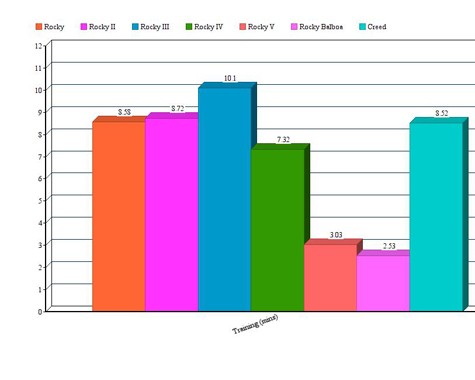 The sole area in which V was the victor was the amount of on screen knockouts with 17. Then in descending order we have Rocky III (14), Creed (9), Rocky Balboa (7), Rocky IV (3) and the first two in joint last with just the one KO apiece. 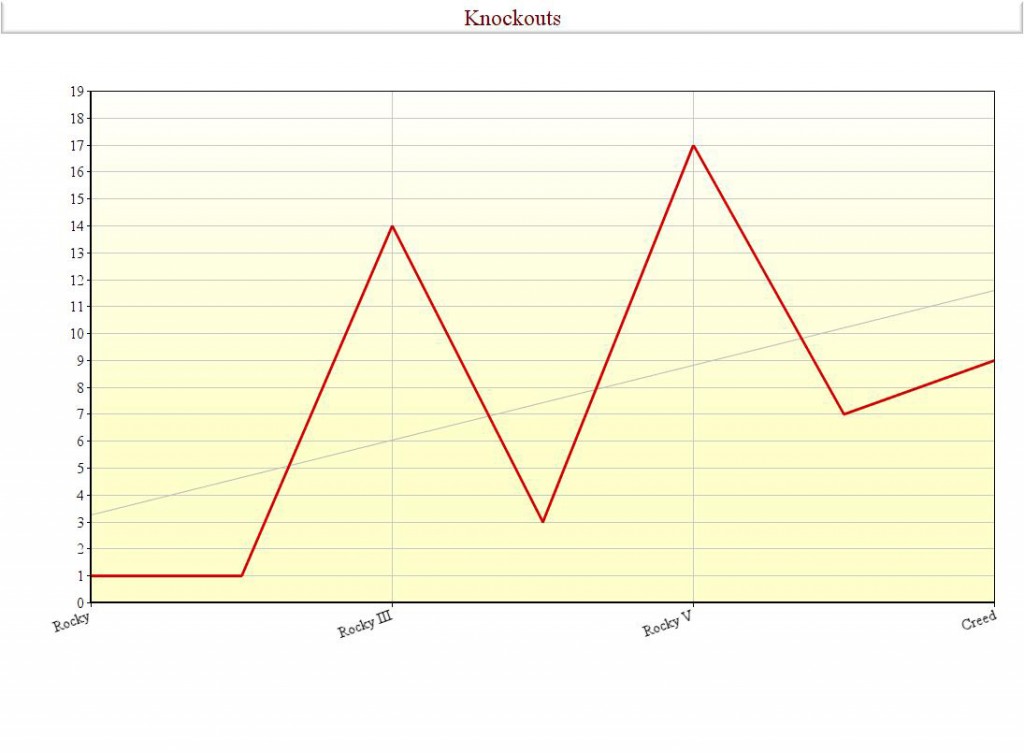 After adding together all the screen time dedicated to heartfelt scenes with love interests, child and parent figures, Rocky II was proven to have the most heart in the film series. The first sequel contained 42:58 of all this mushy stuff, trouncing Creed (31:30) and the original (28:54) who came in second and third respectively. 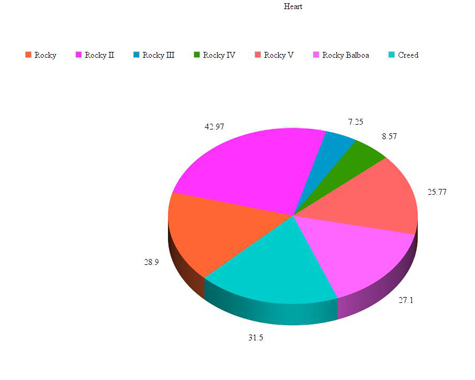 Admittedly, the fourth film might have figured higher if we had included the heavily implied (and incredibly unsettling) romantic relationship between Paulie and the robot butler.

What the hell was that about?

That's right, even Rocky had a montage. In fact, all seven of them had at least one. It will come as a surprise to absolutely no one that the fourth film AKA Rocky Balboa ends the Cold War was the most montage-heavy by some distance. 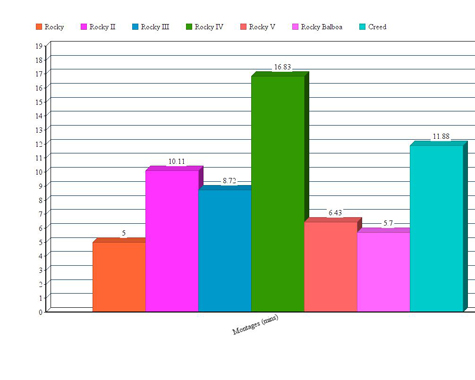 Another trademark of the franchise is showing us scenes or snippets of scenes we've already seen from either a previous film or the one we're currently watching... just in case all those blows Rocky takes to the head have somehow affected your memory as well. 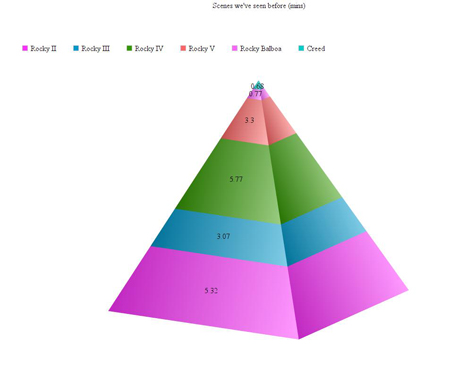 Creed stays true to the spirit of Rocky with its heartfelt emotional drama, high-octane pugilism and it's music blaring, jump-rope skipping, "we're going to beat the Russians" asserting (no wait, that's the fourth one) motivational montages.

However, there is certainly a lot of room for improvement for Creed 2. If whoever's tasked with the challenge can make the sequel even more violent than Rocky III, make it tug at your heartstrings more than Rocky II and have absolutely none of the elements they introduced for the fifth monstrosity, then we can all let out a cathartic "Yo Adrian, we done it!". The underdog will have upset the odds again.


popular
"I never really cried or got emotional over what I've done as an individual. I couldn't give a s***"
"I was off the grid" - Aidan O'Shea respond's to Mayo criticism after club championship win
"If I break my wrist, it's on f***ing both of you." - Koepka and Berger act the spoiled child
'I won The Open by six shots in my home country, but this was the best week of my golfing career'
The FootballJOE Pub Quiz: Week 7
"I told him the absolute truth" - Sergio Garcia on his Ryder Cup talk with Rory McIlroy
Final Ryder Cup player ratings a tough read for some Team Europe big guns
You may also like
2 years ago
Roy Jones Jr. is actually willing to fight Creed star Michael B. Jordan
1 month ago
Tremendous sportsmanship in Tokyo as Kellie Harrington brings each fighter to the top of the podium
1 month ago
Kellie Harrington delivers fight of her life to claim Olympic gold
1 month ago
Michael Conlan's electrifying ring walk to Irish ballad will give you chills
1 month ago
Tyrone McKenna reveals what two things Irish people are good at in hilarious post-fight interview
1 month ago
Michael Conlan reveals his ring walk song for tonight's homecoming fight in Belfast
Next Page