While Sky Box Office had the Anthony Joshua vs Joseph Parker PPV this side of the Atlantic, Showtime broadcast the fight Stateside.

With the fight in Britain headlined by a British champion being covered by an all-British panel of Adam Smith, Johnny Nelson, Carl Froch and Tony Bellew, there were concerns about regional bias from Sky. Considering Bellew admitted after the card that he acted unprofessionally during the co-main event, these fears were warranted. 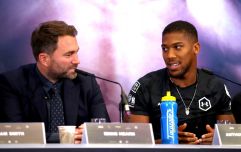 END_OF_DOCUMENT_TOKEN_TO_BE_REPLACED

To ensure hearing balanced coverage of the fight, some folks sought out the Showtime broadcast. The vast majority of those who were able to tune into the American commentary were impressed with what they heard. Mauro Ranallo and Paulie Malignaggi's performances in the booth, in particular, were received very well.

Play-by-play commentator Ranallo impressed folks with his impassioned criticism of the horrendous refereeing of the headliner. Once the man in the middle disrupted the fight for no valid reason, Ranallo reacted like any boxing fan would.

"What the hell is the referee doing?!" - Mauro Ranallo #JoshuaParker

Whereas Malignaggi brought a little more expertise to his role very different. While Ranallo's job was to tell the story of the fight and occasionally entertain, Malignaggi provided analysis in real time.

His explanation for the different jabs Joshua utilised, which he went on to reference in his victory speech, was one of many things fans appreciated about his offerings. Joshua pretty much said after the fight that his jab was a major factor in the victory, but those watching at home already had a good grasp of why it was so effective because of Malignaggi's breakdowns.

@PaulMalignaggi your explication of difference in jabs was amazing, been watching boxing since Ali vs Spinks and have never heard that, that’s what makes you great

@SkySportsBoxing need to sign @PaulMalignaggi full time. Its always a breath of fresh air when he provides fight analysis


popular
"I remember someone saying, 'This guy's the best of the lot of them. Just wait for him'" - Brian O'Driscoll
"I trained with a guy that was born in 2004 the other day. We reckoned Earlsie could be his father!" - Peter O'Mahony
Nigel Owens on most annoying players to referee (three of them are Irish)
Six All Blacks but no Ireland players in world's top 20 list headed by Antoine Dupont
The story of the GAA's greatest ever minor
"I asked one question and lads slagged the arse off me!" - Johnny Sexton on Roy Keane chat
Cork GAA will have fight on its hands to hang onto top prospect
You may also like
2 months ago
Tyson Fury 'wounded' by Anthony Joshua's loss to Oleksandr Usyk
2 months ago
Eddie Hearn involved in heated exchange with fan after Anthony Joshua fight
2 months ago
Professional boxing is on its knees and it might be too late to save it
3 months ago
"I’ve done everything he hasn’t done" - Tyson Fury replies to Anthony Joshua interview in typical Fury fashion
4 months ago
It's finally happening - Anthony Joshua announces his next opponent
6 months ago
Anthony Joshua's lockdown work-out routine seems weirdly achievable
Next Page