Mike Tyson has tried to let most of his grudges go but he's definitely not going to warm to Don King any time soon.

Tyson has made no secret of his feelings towards King, who was sued by Tyson for $100 million after the former heavyweight champion accused his ex-promoter of cheating him out of millions of dollars from his boxing winnings. That case was settled for $14 million in 2004.

In one of the most infamous stories from Tyson's autobiography, Undisputed Truth, 'Iron Mike' admitted to lashing out at King the year before the settlement, writing:

"Don picked us up at the private airport in his Rolls. We were driving down to Miami from Fort Lauderdale on the I-95. Don said some innocuous thing and all that jealousy and rage spilled out of me and I kicked him in his fucking head."

The bad blood definitely seems to be there still, with Tyson tossing the contents of his glass of water over King at the Boxing Hall of Fame induction over the weekend in Canastota, New York.

As King took to the stage, he appeared to give Tyson a friendly pat on the shoulder but Tyson was not in the mood to pretend like they were pals. 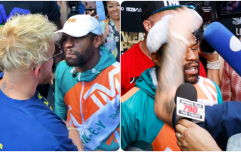 END_OF_DOCUMENT_TOKEN_TO_BE_REPLACED

Tyson has admitted that he shouldn't have reacted as he did but he simply couldn't keep his temper.

"That was me being immature, I shouldn't have done that," Tyson told Sirius XM. "But, you know, he touched me, he tapped me on my shoulder ... it's just, I don't know.

"He talked in there like he was my friend and that was just bullcrap."

.@SiriusXM EXCLUSIVE: @MikeTyson explains why he threw a glass of water at Don King last night at the #ibhof2018 induction weekend, telling @CommishRandyG & @gerrycooney that while he shouldn’t have done that, King shouldn’t have approached Mike like he was Tyson’s friend. pic.twitter.com/HpNBR9a8Xj


popular
Jake Paul set upon by Floyd Mayweather and security staff after confrontation
The Garry Ringrose narrative around the Lions Tour is complete bull
South African media shocked by Lions omissions of Sexton and Ryan
"Sadly at this point in time, it's Johnny" - Why Sexton missed Lions spot
'Jesus Christ! How am I going to put up with this lad for nine weeks?!'
You'd swear the world was ending as Spanish tv host goes after Eden Hazard
The biggest Lions head-scratchers as Warren Gatland surprises us all
You may also like
8 hours ago
"They all seem to be up Canelo's r***piece" - Why Tyson Fury believes Billy Joe Saunders will beat Canelo
4 days ago
Katie Taylor's final answer after latest triumph sums up her status in the game
5 days ago
Katie Taylor edges Natasha Jonas on the scorecards to defend her world title belts
5 days ago
Everything you need to know about Katie Taylor's world title fight against Natasha Jonas
6 days ago
Michael Conlan gets the win but had reason to "worry" when the scorecards were read out
6 days ago
Natasha Jonas' trainer calls for 'fair judging and commentary' against 'media darling' Katie Taylor
Next Page