He's not backing down a single, solitary inch.

Michael Conlan touched down in Dublin Airport on Wednesday afternoon and was informed of the comments from AIBA president Ching-Kuo Wu. Conlan's passionate outburst, following his controversial Rio 2016 boxing exit, drew ire from Wu, who declared:

"You cannot humiliate people. They are officials. He put himself in a difficult position, I can tell you. A lot of disciplinary action will follow."

Conlan was brought up to speed before biting back. He told reporters:

"I still believe everything I said was the truth, it was me being honest. If I hadn’t said those things, even though it was a bit crazy, I would probably have a bit of regret now not saying it.

"I know what happened and I know what went on, it is what it is, life goes on." 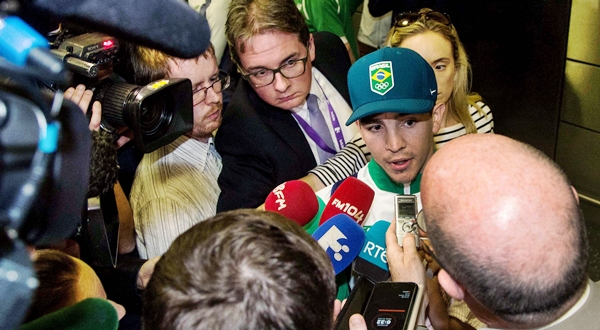 Conlan is not bothered 'in the slightest' by Wu's threats. "They have no right to punish me after what they’ve done," he proclaimed.

The Belfast reflected on AIBA sending certain judges home from Rio, including the ones that scored his bout. He commented:

"I spoke the truth and how can they discipline me after more or less admitting what they did was wrong because they sacked the judges?

"They sacked judges and changed people in roles, so it’s a bit cheap what they are saying."

END_OF_DOCUMENT_TOKEN_TO_BE_REPLACED

The amateur world champion, who is now considering professional offers, says he has been contacted by people from Puerto Rico, Mongolia, and just about everywhere in between since he spoke out against AIBA at Rio 2016.

On the latest GAA Hour we look back at Mayo-Tipperary and chat to Andy Moran about his incredible, never-ending career. Listen below or subscribe here on iTunes


popular
The FootballJOE Pub Quiz: Week 11
O'Hora and Keegan hammer into each other, both of them only revelling in it
McBrearty has dramatic equaliser ruled out as Naomh Conaill win Donegal grudge game
Man United's tactical issues summed up in six shocking screenshots
Jesse Lingard seeks to clear up what United fan shouted when he was warming up
Liverpool's half-time words in Old Trafford dressing room will please fans greatly
Man United experiencing their Bishop Brennan getting kicked up the arse moment
You may also like
2 years ago
Military coups, AK47s and gold medals - the remarkable story of how Ben Ryan guided Fiji to Olympic Sevens glory
3 years ago
Michael Conlan's embracing the lowest point of his career and making it his own
4 years ago
Ireland loses Olympic sailor Saskia Tidey to Team GB ahead of Tokyo 2020
4 years ago
It seems there was just one problem with O'Donovan brothers' appearance on Graham Norton
4 years ago
WATCH: O'Donovan brothers had a Hollywood actress entranced on The Graham Norton Show
4 years ago
WATCH: Ireland's bittersweet sporting year summed up perfectly by top betting surprises
Next Page