This isn't the first boxing rodeo Michael Conlan has experienced.

The clash to find out who the greatest middleweight on planet Earth has taken place, and the result has left a sour taste in everybody's mouth. After 12 hard-fought rounds, the judges could not agree on the outcome of Gennady Golovkin vs Canelo Alvarez.

Dave Moretti scored the fight 115-113 in favour of Golovkin, Don Trella had it as a draw and Adalaide Byrd had the most eyebrow-raising of all the cards with a 118-110 for Canelo.

Says it all, really https://t.co/koKAkCl0nX 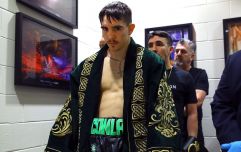 END_OF_DOCUMENT_TOKEN_TO_BE_REPLACED

The general consensus among fans was that Golovkin's pressure, ring control and output were enough to edge a tough war against the Mexican superstar. While scoring the fight as a draw is defendable, giving Canelo a dominant victory most certainly is not.

Byrd's card was undoubtedly the main talking point after the fight for all the wrong reasons. Former world champion and ex-Conor McGregor sparring partner Paulie Malignaggi certainly didn't agree with the judge's assessment of the fight.

Manny Pacquiao is no stranger to questionable scoring in the fistic arts. The Filipino legend was on the wrong side of a contentious decision in his welterweight title fight to Australia's Jeff Horn in July.

END_OF_DOCUMENT_TOKEN_TO_BE_REPLACED

The Pac-Man clearly thought he did enough to keep his WBO belt on that night and he felt GGG was also unlucky that his title fight against Canelo ended in a draw. Fortunately for the Kazakh, he gets to keep his belts following the fight.

Michael Conlan may have had the pick of the gags following the high-profile title match though.

The Belfast boxer famously quit the amateur ranks after he was robbed of a medal at the 2016 Olympic Games when he was deemed to have been beaten by Vladimir Nikitin in the quarter-finals despite dominating the fight. The judges gave Nikitn the unanimous decision victory, who was so badly beaten up from the Conlan bout that he was unable to continue in the competition. He withdrew before the semi-final because of injuries and took home a bronze medal.

Conlan's expletive-laden interview with RTE aimed at AIBA directly after flipping the bird to the judges instantly became iconic. He was quick to jokingly suggest that the world governing body for amateur boxing may have been behind this contentious result too.


popular
"I remember someone saying, 'This guy's the best of the lot of them. Just wait for him'" - Brian O'Driscoll
"I trained with a guy that was born in 2004 the other day. We reckoned Earlsie could be his father!" - Peter O'Mahony
Nigel Owens on most annoying players to referee (three of them are Irish)
Six All Blacks but no Ireland players in world's top 20 list headed by Antoine Dupont
The story of the GAA's greatest ever minor
"I asked one question and lads slagged the arse off me!" - Johnny Sexton on Roy Keane chat
Longford GAA movie explores the tale so many young footballers can relate to
You may also like
2 months ago
Boxing investigation finds at least seven suspicious results at Rio Olympics
4 months ago
Michael Conlan's electrifying ring walk to Irish ballad will give you chills
4 months ago
Tyrone McKenna reveals what two things Irish people are good at in hilarious post-fight interview
4 months ago
Michael Conlan reveals his ring walk song for tonight's homecoming fight in Belfast
4 months ago
Michael Conlan dreams of fighting for a world title at GAA stadium
7 months ago
Michael Conlan gets the win but had reason to "worry" when the scorecards were read out
Next Page