Katie Taylor is still the lightweight champion of the world.

It was pretty much all Taylor for the first half of the fight. She was first to the punch in most of the exchanges and made her opponent miss repeatedly. She kept McCaskill on the end of her straights and was nowhere to be seen once the counter came her way.

The tide began to turn in the second half of the fight as McCaskill began turning into a bit of a brawl. A huge left hand from McCaskill wobbled Taylor midway through the sixth round. Taylor clinched up, remained composed, but the American clearly gained confidence from the power punch landing. 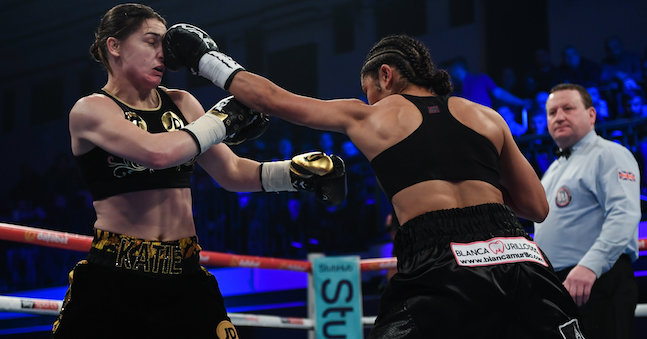 In the seventh round, McCaskill came out for blood. She marched forward, bit down on her mouthpiece and let fly with a wild flurry of punches against the ropes. The referee took a point off Taylor for holding after warning her earlier in the fight. McCaskil took a seat midway through the round, but the referee deemed it to be a stumble as opposed to a knockdown. 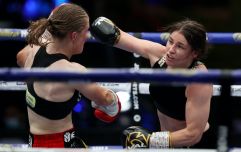 END_OF_DOCUMENT_TOKEN_TO_BE_REPLACED

The relentless pace slowed a little in the closing rounds as McCaskil began wearing the effects of her hard work earlier on. Taylor closed out well and her class really showed against her tiring opponent. The Pride of Bray took the final rounds handily enough.

popular
"My job at Sky is not to be a cheerleader for Rory McIlroy" - Paul McGinley
QUIZ: Can you guess the football shirt sponsors of these classic 90s kits?
Sam Bennett's green jersey masterclass got Lance Armstrong talking
The SportsJOE 12 o'clock quiz | Day 187
"He's found a way to do it. Whether that's good or bad for the game, I don't know"
QUIZ: Identify the football club from these 12 crests
Only old-school fans will get 20/20 in this 1990s footballers quiz | Part 2
You may also like
2 months ago
"I think I earned the shot" - Heather Hardy makes pitch for Katie Taylor fight
10 months ago
Katie Taylor set for Amanda Serrano super-fight in March 2020
10 months ago
'I never thought, three years ago, I'd be headlining somewhere like the Manchester Arena'
1 year ago
Katie Taylor's next three fights include Delfine Persoon rematch
1 year ago
Carl Frampton on how much a boxer's fight purse is actually worth
1 year ago
"You know what the problem is for female fighters? They can’t make money" - Lou DiBella
Next Page