"Watch your mouths because you don't know who you're talking to sometimes..."

A video has emerged showing what appears to be Anthony Joshua in a heated confrontation with a group of students after he was reportedly heckled as he walked past their halls of residence.

The students from Loughborough University are said to have taunted the former world heavyweight champion form an open window, accusing him of being too scared to fight Tyson Fury.

END_OF_DOCUMENT_TOKEN_TO_BE_REPLACED

The video, which first appeared in The Sun, shows Joshua standing in a flat as he talks to a group of students.

"Remember you’re running your mouth because when I start cracking your glass jaws, none of you will like it," he is heard saying.

"Watch your mouths because you don’t know who you’re talking to sometimes."

Joshua preparing for Usyk rematch at the university

A witness told The Sun: "I don’t think they expected him to retaliate and I don’t think they’ll be doing something like that again. But why would you target one of the toughest guys on the planet?" 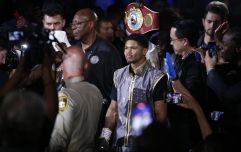 END_OF_DOCUMENT_TOKEN_TO_BE_REPLACED

Joshua has been using Loughborough University's facilities in preparation for his eagerly anticipated rematch with Oleksandr Usyk later this summer.

Joshua has never faced Fury in the ring, despite the possibility often being discussed. A bout appeared set to take place last summer for all four world titles, only for Fury to be ordered to face American Deontay Wilder for a third time instead.

Fury's last fight saw him beat Dillian Whyte at Wembley last month. He has since insisted he has retired from fighting, claiming he would even turn down the opportunity to face Joshua or Usyk.


popular
The four stone-cold certainties for All-Stars even as early as this
Kylian Mbappe reportedly wants PSG to sell Neymar
Eamon McGee just couldn't help himself with Armagh-melee tweet
Former England Under-21 captain open to playing for Ireland
"He's actually smiling putting the ball over the bar. He should nearly be fainting." - Ryall on Limerick's legacy
Anthony Joshua admits that he was 'let down by his corner' during Oleksandr Usyk bout
"The economy was one of the big reasons" - Cadogan's move from an electrician to personal training
You may also like
22 hours ago
Footage emerges of Erik ten Hag reacting to Man United target Tyrell Malacia
4 days ago
QUIZ: Name every club to play in the Champions League
4 days ago
Malcolm Ebiowei 'ignored Erik ten Hag text' before signing for Crystal Palace
5 days ago
Newcastle set to beat AC Milan to Sven Botman after agreeing a fee
5 days ago
Liverpool set £60m Mo Salah price as contract talks continue
5 days ago
Fans complain about away kit clash in England women's friendly
Next Page