Paula Johnston lost pretty much everything when a fire burned her Buckingham street home to the ground earlier this month.

Johnston was born and reared in the inner city and is very much part of the fabric of the area while Elaine McCann, a neighbour and Kellie Harrington's babysitter once upon a time, said that she was the most selfless person she had met in her life and that her door was always open for a chat, a cup of tea or just a shoulder to lean on.

"They were left with nothing but the clothes on their back and a few photographs. Like even in the temporary housing they're in now, they're on garden chairs," McCann told SportsJOE.

McCann and those in the area quickly formed a fundraising committee to help get Johnston and her family back on their feet after the loss of their home and Harrington was one of the people they reached out to to see if she could assist, which, she was more than happy to do.

"I've known Kellie since she was a little child and I don't know, I would have assumed that a lot of people that would have strived for that [National Elite] belt, that she would have wanted to keep it forever.

"To willingly give it up for me, and to put it up and to see how much she could get, and to go on The Ray D'Arcy show the way she did and to say the things she said, I just can't thank her enough. 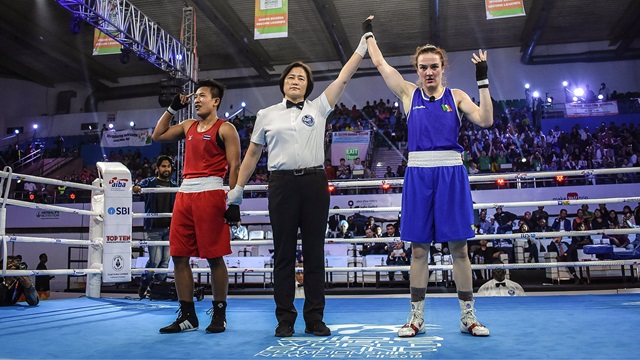 "No one in the area could be prouder of her and she's so humble. She works, she strives, it carries the area. She's great for the younger kids. It's great for the area that they can say 'here's someone from Portland Row, look what she's after achieving. It gives the kids in the area a positive role model and that is what she is.

"She was an ordinary young kid playing around with all the kids in the area and she just followed her dream and it came through. My young fella boxes and he goes around now saying 'I'm from the same area as Kellie Harrington'."

Johnston said that Harrington speaks proudly of where she's from and openly embraces her inner city roots and wears it as a badge of pride, a sentiment she made very clear at the Civic Reception she received last November following her gold medal win at the AIBA Women's World Boxing Championships.

“This is my area, these are the people I grew up with, you have all seen me starting from the bottom, and how I fought my way up to the top,” Harrington told the crowd at her gold medal reception last year. “You are the people who know what I went through to get this."

Harrington did go through a lot.

When she first started boxing at the Corinthians Boxing Club in the inner city, the club didn't even have female toilets. She used to have to fight the boys. She's jumped through plenty of hoops to get to where she is today and Johnston says it's people like her that make her proud to call the inner city her home.

"It was like a death if I'm being honest with you," added Johnston of the loss of her home.

"I lost my mother four years ago and it was that same sense of grief. I couldn't go on. I didn't want to go on. I thought how can something like that happen and wipe out your family home in minutes but then you see people, people that you know everyday, people that haven't got money, you see them donate and girls like Kellie selling her belt and you say 'c'mon, pull yourself together'. 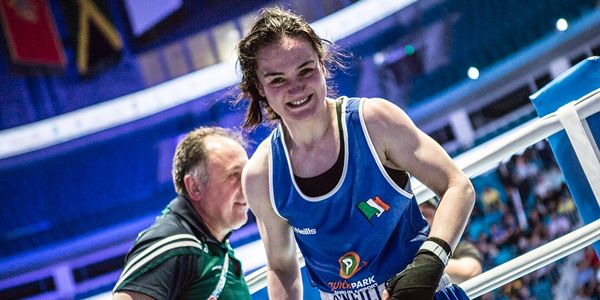 "We have a small group with her and the likes of Wes Hoolahan, Barry Keoghan is from just around the corner from Portland Row, people like that... it's amazing to have them from the area. There wouldn't be many opportunities for them but they made the most of it and they strove to be better. I'm as proud as punch of Kellie. I really am. You just feel that sense of pride yourself.

"It's a rough and tough area but Kellie never tried to hide where she was from."

Mark Hurson, the successful bidder, said that he had come across the auction online and was happy to contribute to what he deemed a worthy cause.

"We saw an article that Kellie had put up regarding the auction and we're great supporters of Kellie and what she's achieved for the country," said Hurson.

Again thanks to @MarkHurson1 of Hurson Engineering for the 3.5k to help the Johnston/Coakley family back on their feet. Look after that belt :) 🥇 https://t.co/pTIdPxgWlh pic.twitter.com/WOXrCAYaug

"We kind of said this is an area where we can help and a great cause so we got in contact and put in an offer and at the end of the day Kellie has been as generous as ourselves in putting the belt up for the family so we're happy to help out."

A GoFundMe page was set up to help the Johnston's recover from their loss and if you wish to donate you can do so by clicking here.