"Give me a crack at that title!" - Jason Quigley makes his play after gutsy win

"Nobody knows what I've been through."

Quigley has endured a frustrating 12 months after going through fight camps only for bouts to be cancelled or postponed. Preparing for any fight is tough enough, but trying to plot a course through the choppy middleweight waters was tougher still when the Covid pandemic is taken into consideration.

END_OF_DOCUMENT_TOKEN_TO_BE_REPLACED

The Donegal native finally made it to the ring to face Moseley with a belt on the line, and both men waded into each other for 10 entertaining rounds.

Quigley, who went into the fight with an 18-1 record, looked to have the better of the exchanges, over the closing championship rounds, but both fighters looked considerably dinged up when the final bell sounded.

The bout went to the judges' scorecards and it was Quigley that had his hand raised, and the WBO-NABO (North American Boxing Organisation) belt strapped around his waist, after a majority decision [95-95, 97-93, 96-94] went in his favour.

As the announcer declared, "And your winner, from Ballybofey, County Donegal, Ireland, JASON QUIGLEY!" the 30-year-old dropped to his knees before being swarmed by his jubilant team. 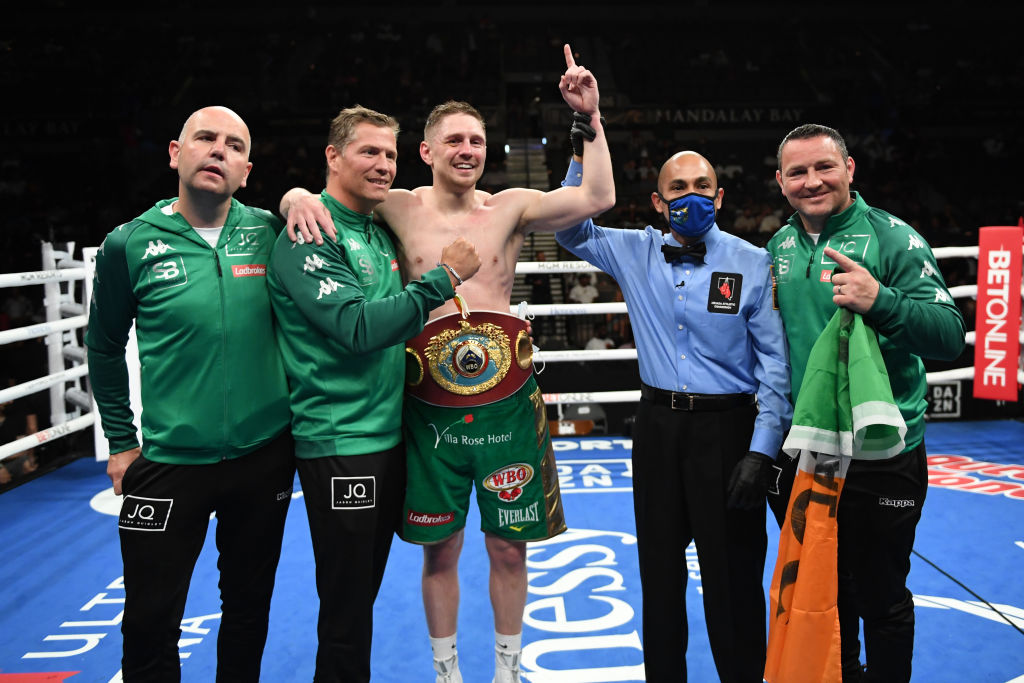 After exchanging some words of commiseration with Moseley Jr., Quigley spoke to DAZN about the tough road he went through, to get back in the world title picture, and how he tapped into everything he could - affirmations, meditation, visualisations, and more - to get win No.19.

Asked what his future plans were, Quigley had clearly not forgotten how Demetrius 'Boo Boo' Andrade - the outright WBO champion - got his name wrong, years ago, when he was seeking game opponents.

"I've got the belt now; I want to move on. I remember, three or four years ago, when Boo Boo Andrade had no promoter, he had no real management going on. He was like, 'I'll fight this Jason Quagley guy'. He didn't even pronounce my second name right.

"Boo Boo Andrade, now you're the champ. You're always crying that you don't have people to fight you. I'm not saying I'm going to get in and kick your ass. I'll get in there and put on one hell of a fight with you. I've got a belt, you've got the main one, give me a crack at that title!"

Andrade moved to 30-0 when he defeated Liam Williams in April of this year and he has not been seriously tested since 2017.

Quigley is hoping his fourth win on the bounce, and the manner of his performance can give him a crack at Boo Boo.


popular
Rob Kearney on defying union "bigwig" that told him he'd never play GAA again
How one text message a teammate sent Kieran McGeary proves that Tyrone's success was a team effort
Kieran McGeary on his relationship with Mickey Harte and his role in Tyrone's success this year
"I just knew that Karen was going to be there with us... I absolutely adored her" - Maeve Kelly
The scenes in Newbridge as the biggest hit and hope ever knocks Moorefield out
"Mayo have been back and back and back all the time. That's some resilience, to do that." - McGeary bats for Mayo
"I like to address things on the spot" - Niall Morgan reveals why he sometimes clashes with teammates at training
You may also like
2 weeks ago
Katie Taylor called out for next fight during her victory over Jennifer Han
2 weeks ago
Katie Taylor puts on masterclass to win 13th world title defence in style
2 weeks ago
"She is beatable" - Jennifer Han confident she can upset the odds and defeat Katie Taylor
2 weeks ago
"The atmosphere's going to be electric" - Katie Taylor is excited to fight in her favourite football team's city
2 weeks ago
Josh Warrington vows not to make the same mistake again as he seeks revenge against Mauricio Lara
3 weeks ago
Manny Pacquiao struggles to open his eyes after brutal boxing defeat
Next Page