Former WBC Cruiserweight champion Tony Bellew has poked fun at David Haye's lawyer Adam Morallee ahead of their rematch at The 02 Arena in London this weekend.

Morallee provoked the crowd at the press conference in Liverpool by pointing to those present, and Bellew, claiming that Haye would defeat the Liverpudlian in their rematch after Haye was stopped in the 11th round in the first fight last year.

Bellew was seen laughing at Morallee during the press conference and began his address to the crowd by comparing Morallee to Simon Bird's Will McKenzie character from The Inbetweeners.

🤣 "First of all, I'd just like to thank Will out of The Inbetweeners - He's just given me more motivation" - @TonyBellew responds to Adam Moralee's (Team Hayemaker) press conference comments #BellewHaye2 pic.twitter.com/oz42EM1cW7

Bellew added that Haye was fighting for his career in their rematch and that the former WBA heavyweight champion only returned to a rematch to 'rob the bank'.

"On Saturday, it comes to an end, it really does," said Bellew.

"For the first time in your career you are actually fighting for your career.

"If this goes wrong, nothing can save you. I've done this five or six times. I know the kind of pressure it brings. You're in a lot of trouble on Saturday." 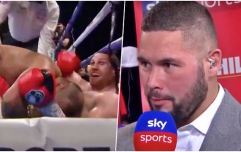 END_OF_DOCUMENT_TOKEN_TO_BE_REPLACED

Bellew added: "David was amazed that I took the rematch. I'm doing it, and I'll do exactly what I did in the first fight.

"David is not back to win world titles, he's back to try to rob the bank. He wants to fight little fatties like me.

"Expect a cagey start, he'll show me the respect he should have shown me in the first fight, I'm sure. Saturday is time to go to war, and (Haye's) career ends in a beat."


popular
Rob Kearney taught a classic GAA lesson when he tried to have the craic in second game back
Ex-Down boss Paddy Tally will be part of Jack O'Connor's staff if he's offered the Kerry job
Shane Lowry had no problem setting reporters straight at Ryder Cup briefing
GAA could learn a thing or two from AFL's parade and self-promotion
The scenes in Newbridge as the biggest hit and hope ever knocks Moorefield out
Meath superstar named player of the month after sensational final performance
Galway fans' frosty reception for Davy Fitz doesn't make any sense
You may also like
2 years ago
Tony Bellew's wife claims she was provoked after being filmed in homophobic rant
2 years ago
Tony Bellew shows off hard-earned abs and jokes about weight gain programme
2 years ago
Tony Bellew retiring from boxing this weekend but may be tempted to take MMA fight
2 years ago
Tony Bellew nails it with another detail about the man who hit McGregor from behind
3 years ago
Tony Bellew slams drug cheat Alexander Povetkin ahead of Joshua fight
3 years ago
Tony Bellew's next fight confirmed, and it's far from easy
Next Page