BT Sport viewers were upset at the broadcaster's decision to show a Union Jack on screen beside Michael Conlan's name at his Belfast homecoming on Saturday night.

Conlan cruised to victory with a unanimous decision win over Adeilson dos Santos in his Belfast homecoming fight at the SSE Arena to take his professional record to 8-0 in an eight-round fight.

Conlan looked in charge throughout the fight but some viewers were angered when Conlan, who hails from a nationalist background in west Belfast, was shown on screen accompanied by a Union Jack flag.

The 26-year-old super bantamweight represented Ireland at both the 2012 and 2016 Olympic games and has brought the tri colour to the ring several times throughout his relatively short professional career. 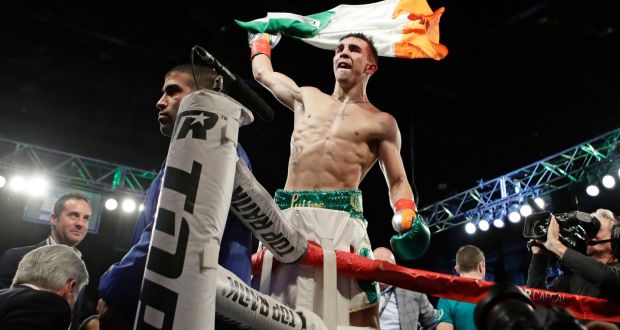 I wonder how many complaints @BoxNation and @BTSportBoxing got about Michael Conlan having the Union Flag next to his name before the change it to the Northern Irish flag at the beginning of round 5?

@BTSportBoxing yous have the wrong flag on Michael Conlan, he’s not British and never will be, he’s Irish and proud to be 🇮🇪🇮🇪🇮🇪🇮🇪

Conlan was not satisfied with his performance after the win and insisted that he is not the finished article yet after going the distance for just the third time in his professional career.

"It was good, [but] it was daunting a bit, I feel okay, now. I was feeling it a bit in there because that was my first proper fight, so to speak. And he forced the pace a bit, he was smart, and awkward, but I'm happy with the performance happy, with the victory," Conlan told BT Sport post-fight.

"It's still not the finished article, I've still got a lot to learn. I think every boxer does, but I'd give it a six out of ten. But I'm happy. I worked on things that I thought were good in there. Some things were mistakes, but that's part of the game - isn't it? Part of learning."

"This was amazing. I want to thank everyone for coming out"@mickconlan11 spoke after he maintained his unbeaten record in Belfast. #TheHomeComing#TheConlanRevolution pic.twitter.com/ZvFZWySzMa