Everything you need to know about Floyd Mayweather vs. Tenshin Nasukawa

Don't get too excited about Floyd Mayweather's next trip through the ropes...

What was initially hyped as a potential cross-sport clash with undefeated kickboxer Tenshin Nasukawa has now been clarified as no more than an exhibition contest.

Mayweather shocked the world when he appeared alongside the Japanese prodigy, Nasukawa, at a press conference in early November to announce that the pair would be competing against one another on RIZIN FF's New Year's Eve card.

Confusion followed when Mayweather quickly ruled himself out of the bout by insisting that he had been misled by RIZIN officials and was "blindsided by the arrangements that were being made without my consent nor approval."

Mayweather won't want anything to do with leg kicks https://t.co/qhaqXA0V3L

But the match-up was soon back on when it was confirmed as an exhibition showing which will be contested over three three-minute rounds under straight boxing rules.

END_OF_DOCUMENT_TOKEN_TO_BE_REPLACED

The pair will wear RIZIN's own 8oz. gloves and weigh no more than 147lbs for the exhibition, which is scheduled for New Year's Eve in Tokyo.

Interestingly, no judges will be in place and being an exhibition match, neither fighter's undefeated record will be on the line.

"I love competing against fighters from all walks of life like in my amateur days," Mayweather said. "It’s all about entertainment. Nine minutes of entertainment. It’s going to be amazing.

Floyd Mayweather isn't the only one being approached by an Asian kickboxer https://t.co/kNdIkKECo1 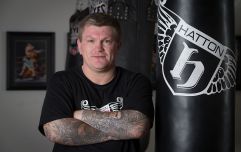 END_OF_DOCUMENT_TOKEN_TO_BE_REPLACED

"I’m in the entertainment business. That’s what I go out there to do. I love to do this. I’m working out to put on a show for three rounds."

The fight can be ordered pre-ordered to watch here.

Nasukawa will be giving up plenty of size to the boxing legend, who most recently competed against UFC superstar Conor McGregor and moved to 50-0 with a 10th round TKO.

Nasukawa has been sparring with Jorge Linares in Las Vegas recently and can't wait for the opportunity to compete against Mayweather on New Year's Eve.

"There’s never been a Japanese fighter to face Floyd Mayweather in the ring," Nasukawa said. "As an athlete, this is something that’s a great honour and a challenging task. I’d like to make a big impression."


popular
Roy Keane flew home from Qatar World Cup as 'fellow pundits were getting on his nerves'
World Cup 2022 Day 20: All the major action and talking points
Talksport presenter puts Martin O'Neill to the pin of his collar over Declan Rice and Jack Grealish
Roy Keane reveals what he wrote about England during Senegal game
Rory McIlroy explains 'falling out' with Shane Lowry that lasted a few years
World Cup Power Rankings: The top 10 players at the tournament ahead of the quarter-finals
Roy Keane and Gary Neville reignite argument about Cristiano Ronaldo
You may also like
11 months ago
Jake Paul taunts Floyd Mayweather with New Year's resolutions list
1 year ago
Professional boxing is on its knees and it might be too late to save it
1 year ago
Floyd Mayweather offers to train Tyron Woodley ahead of his Jake Paul fight
1 year ago
Jake Paul set upon by Floyd Mayweather and security staff after confrontation
2 years ago
Pricing plan to watch Mayweather vs Paul is suitably ridiculous
3 years ago
Manny Pacquiao agrees mystery deal with MMA promotion that paid Mayweather $9 million
Next Page