AJ vs Ruiz part II is on the cards

Eddie Hearn has said that a rematch between Anthony Joshua and Andy Ruiz will take place this winter at a venue to be confirmed shortly.

The promoter said he had met with Joshua and his trainer following his defeat to Ruiz at Madison Square Garden on Saturday night, they have triggered the rematch clause in the contract.

"After meetings with AJ, Rob Mc and the management team in NY, we have today triggered the contracted rematch clause with Andy Ruiz Jnr. The fight will take place in Nov/Dec at a venue to be confirmed shortly," Hearn tweeted.

After meetings with AJ, Rob Mc and the management team in NY, we have today triggered the contracted rematch clause with Andy Ruiz Jnr. The fight will take place in Nov/Dec at a venue to be confirmed shortly. 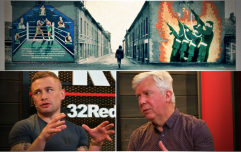 END_OF_DOCUMENT_TOKEN_TO_BE_REPLACED

Joshua suffered a shock defeat - his first ever - to Ruiz in New York by knockout, but responded in a classy manner, saying "this is Andy’s night, congratulations Champ."

The Watford-born boxer will have the chance to avenge his defeat to the Mexican this winter.


popular
Two debutants and some shocks as Farrell names Ireland team
"I want to be myself... Imitation's not a great thing, you know?"
Conor McGregor demands apology from ESPN pundit over Cerrone comments
Two giants rise above the fray
Kerry vs. Dublin ends in meleé, and a draw
Woodward must "prove us all wrong", not Sanchez
Ireland team announced with confirmation that two huge players miss out
You may also like
2 weeks ago
Move over Sergio Ramos, there's a new shithouse in town
3 weeks ago
Jurgen Klopp's contagious mentality is creating a generation of Liverpool winners
3 weeks ago
Trent Alexander-Arnold is redefining what it means to be a right-back
1 month ago
Premier League team of flops - 2010-2019
1 month ago
Leicester City have form for upsetting the apple cart, and Liverpool shouldn't take them lightly
2 months ago
Predicting every Spurs player's fate under Jose Mourinho
Next Page