It wasn't just the Irish fans who were shocked when the judges' decision was delivered at the end of Tuesday's AIBA World Championships light-welterweight quarter-final between Amy Broadhurst and India's Simranjit Baath Kaur.

The commentators too were left gobsmacked when Broadhurst missed out on a bronze medal in controversial circumstances after outboxing her opponent for large stages of their fight.

Dundalk's Broadhurst started the better and should have taken the first frame with little doubt and while she encountered some resistance from Kaur in the second, it could be argued that the Irish fighter enjoyed the better of the exchanges in that round too. 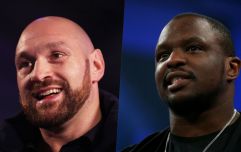 END_OF_DOCUMENT_TOKEN_TO_BE_REPLACED

Kaur was down in the third round but it was deemed a slip, although it looked like contact had been made, and what appeared to be a solid left hook resulted in a point deduction for Broadhurst as the referee claimed she was not hitting with her fist.

Even with the docked point, most felt that Broadhurst had done more than enough to warrant the judges' nod but the Dealgan Club boxer was left in tears when the decision was read by the ring announcer.

The fact that one judge, from Algeria, saw the fight as one-sided as 30-26 is nothing short of disgraceful and Irish amateur boxing fans will be all too familiar with this feeling of disappointment.

You can watch Broadhurst's contentious defeat from the 1 hour 21 minute mark of the below video.


popular
Nigel Owens on most annoying players to referee (three of them are Irish)
"I trained with a guy that was born in 2004 the other day. We reckoned Earlsie could be his father!" - Peter O'Mahony
"I remember someone saying, 'This guy's the best of the lot of them. Just wait for him'" - Brian O'Driscoll
Six All Blacks but no Ireland players in world's top 20 list headed by Antoine Dupont
What is the story with Tyrone clubs' woeful record in the Ulster championship?
"I asked one question and lads slagged the arse off me!" - Johnny Sexton on Roy Keane chat
Longford GAA movie explores the tale so many young footballers can relate to
You may also like
3 years ago
Kellie Harrington joins exclusive club with World Championship gold medal
2 months ago
Boxing investigation finds at least seven suspicious results at Rio Olympics
2 months ago
Eddie Hearn involved in heated exchange with fan after Anthony Joshua fight
2 months ago
Amir Khan removed from US flight over face coverings row
2 months ago
Professional boxing is on its knees and it might be too late to save it
2 months ago
Tommy Fury spotted having the time of his life at student night out
Next Page