Dereck Chisora with possibly the weirdest threat in boxing history

We've seen various types of threats from different heavyweights over the years.

There's been the eloquent poetry of Muhammad Ali, the menacing promises of Mike Tyson and the matter-of-fact predictions of Wladimir Klitschko.

Now there's this gem from Dereck Chisora which will go down in boxing lore as one of the strangest things ever uttered in the build-up to a fight.

During a recent episode of the Gloves are Off, Chisora was asked how he expected his upcoming rematch with Dillian Whyte to play out.

"You ever taken those laxative pills? I'm going to go through this man!"

Dillian Whyte was left bemused by Derek Chisora's prediction for their rematch 🤔 pic.twitter.com/xHlMfpfn7X

"Have you ever taken those laxative pills? The ones that you take, you pop, and then you wait for 20 minutes and you go to the toilet? They go through you. I'm going to go through this man." 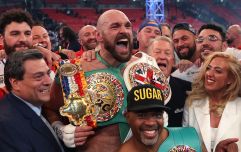 END_OF_DOCUMENT_TOKEN_TO_BE_REPLACED

Whyte appropriately responded: "That's a bit of a weird analogy."

The first meeting of the British rivals in 2016 saw Whyte claim a split decision over 'Del Boy' but Chisora has knocked out three of his four opponents since that bout.

Whyte, meanwhile, is looking to put himself in the position where he can avenge his one career defeat against Anthony Joshua and a dominant win over Chisora on December 22 could well set up a second meeting with 'AJ' next year.