Deontay Wilder showed no sympathy as a journey that had long felt written in the stars quickly fell apart as Anthony Joshua was put on the canvas four times before finally admitting defeat against Andy Ruiz Jr.

While Joshua's longterm verbal sparring partner Tyson Fury struck a surprisingly consolatory tone in the aftermath of the fight, the opponent the 29-year-old Watford native had been being built up to fight, Deontay Wilder, showed no such class.

END_OF_DOCUMENT_TOKEN_TO_BE_REPLACED

In the aftermath of the bout, the WBC heavyweight champion tweeted: "He wasn’t a true champion.

"His whole career was [sic] consisted of lies, contradictions and gifts. Facts.

"And now we know who was running from who!"

Later adding: "The worst thing you can do in life is Fucking Quit!!"

He wasn’t a true champion. His whole career was consisted of lies, contradictions and gifts.
Facts and now we know who was running from who!!!!#TilThisDay

The worst thing you can do in life is Fucking Quit!! 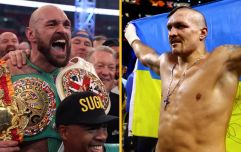 END_OF_DOCUMENT_TOKEN_TO_BE_REPLACED

Joshua's next fight will now be a rematch in the UK to try to reclaim his title later this year, while Wilder is set to face Luis Ortiz and will now likely go on to a rematch with Tyson Fury, following the pair's draw last year.

If he is able to regroup and win back his titles against Ruiz, then it may be looked back on as a blip in Joshua's career.

"I got beaten by a good fighter," said 29-year-old Joshua in the fight's aftermath. "It will be interesting to see how far he goes, but this is all part of the journey.

"He's a champion for now, I shall return."

"It's guts and glory, but this is all about the legacy and story."

Can @AnthonyFJoshua bounce back from a stunning defeat in New York?

While Ruiz reminded everyone that he had just lived out his own fairytale in the ring.

"The sky is the limit baby.

"That was my first time getting dropped on the floor, but you know what, it just made me stronger, and it made me want it even more, and I just had to knock him down back.

"Because of the Mexican warrior that I am, I've got that Mexican blood in me. Talking about the Mexican style, I just proved it."

You may also like
4 hours ago
QUIZ: Name the 2018 World Cup Goalscorers
4 hours ago
Gary Neville confirms he will work for Qatar's beIN Sports during World Cup
4 hours ago
Denmark players will head to Qatar without families to protest human rights
1 week ago
QUIZ: Where did they sign him from? #2
1 week ago
The FootballJOE Pub Quiz: Week 55
1 week ago
Mathias Pogba sends open letter to Paul over extortion allegations
Next Page